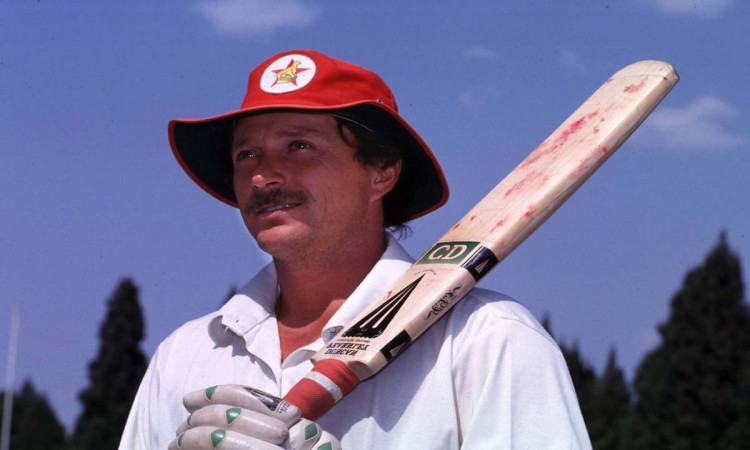 David Laud Houghton is a former Zimbabwean Test cricketer. He captained Zimbabwe in their first four Test matches, losing two and drawing two. Zimbabwe won one of the 17 One Day Internationals he was captain for.

Dave was born in Bulawayo, the youngest of three brothers, but the family soon moved to Salisbury (now Harare). Each of the brothers was a fine sportsman in a very sports-oriented family: Ken, the oldest, played hockey for Zimbabwe, while Billy also played first-class cricket, for Rhodesia B in the Currie Cup B Section. They lived in a cul-de-sac, which enabled them to play cricket in the street when young. Their parents gave them full support and encouragement in all their sporting activities. They all attended Blakiston Primary School, and in his final year there Dave played for the national junior schools team, known as the Partridges, hitting a couple of fifties against South African provincial teams of the same age.

He was also a wicket-keeper at that stage; he 'just happened' to be a keeper at all the sports he played, keeping goal in soccer and hockey -- in fact, he was the national side's hockey goalkeeper for several years. After leaving school, he was a policeman for several years, which meant he was required to leave his original club, Alexandra (known universally as Alex), and play for the Police team, which was then in the first league.

After independence, he usually continued in his dual role, although occasionally played as a batsman only, while Robin Brown kept wicket. However, it was generally agreed that Dave was the better of the two and many judges still rate Dave as Zimbabwe's best keeper since independence. His ability as a hockey goalkeeper stood him in good stead; he had very quick reflexes, was very agile standing back and also achieved some brilliant dismissals when standing up to the stumps.

During the early 1980s Dave and Andy Pycroft was the mainstay of Zimbabwe's batting and frequently had to rescue the team between them after a bad start. Yet Dave reached fifty on 15 occasions before he finally broke through with his maiden first-class century in England in 1985 just before his 28th birthday. He added 277 for the fourth wicket in partnership with Graeme Hick another former Prince Edward pupil who also hit his maiden first-class century. Dave did not feel that he had really established himself in first-class cricket until the age of 33 despite carrying the fragile Zimbabwe batting, along with Pycroft, through most of the eighties. He first established himself in the national side against the Young West Indians of 1981-82, when he scored a gallant 87 against such bowlers as Malcolm Marshall, Wayne Daniel and Hartley Alleyne.

He was approaching his century when he was struck on the cheekbone trying to hook Daniel; with the last man at the crease, he was unable to retire and take a breather, and was out shortly afterwards. In those early days he did appear to have a weakness against genuine pace, not surprising considering the lack of genuinely fast bowlers in the country, but his ability and confidence to handle these bowlers gradually developed over the years.

After his century in England, he took over a year to score another, for a President's XI against a Young West Indian team, and a third the following year, when captaining a Zimbabwe B team against Sri Lanka B. At the age of 32, at the start of the 1989-90 season, his highest score in a representative first-class international match was 96, against Pakistan B in 1986-87. This excludes, though, his brilliant 142 in the World Cup of 1987-88, against New Zealand at Hyderabad in India. Magnificent batting against the medium-pacers and spinners took his team to within sight of a glorious victory, only for Zimbabwe to fall at the final hurdle.

He developed the ability to score on both sides of the wicket, always seemed to know where to place the ball, and was well able to improvise, especially against the spinners. He became known as a supremely talented touch player able to decimate any attack on his day.Dave was appointed captain of the national team in 1985-86 but held the job for only one year before resigning by his own admission since he did not find it easy to communicate with the players under him, especially when he had to keep wicket and play the role of leading batsman as well.

In 1989-90, with the absence of Andy Waller through injury and the absence of any other senior player who wanted the job, he was appointed captain again against England A and kept the job until 1993-94, when he handed over to Andy Flower who was now ready to assume the role.

So it was that Dave led Zimbabwe into their first-ever Test match against India in 1992-93. This was to be a memorable occasion for Zimbabwe, who had the better of that match against India but even more so for Dave himself who became the first player to score a century on his Test debut when captain as well and only the second to score a century for his country in its inaugural Test.

He struck another purple patch when the Sri Lankans toured Zimbabwe two years later. After warming up with 58 in the First Test, he christened the Queens Ground in Bulawayo in its first Test match with a superb 266, an individual Zimbabwean Test record that may well remain unbeaten for many years. Then he scored 142 in the Third Test.

By the time the tour to Australia for the World Series Cup came round that season, Dave had the remarkable record of having played in every one of Zimbabwe's Tests and official one-day internationals, but he missed his first one in Australia, returning home in time for Christmas to be with his family, who have had to endure much separation from him over the years.

Then he missed the 1996 World Cup after breaking a toe during the course of an invaluable Test century in New Zealand. Finally he was forced to miss Test matches for the first time and the two in Sri Lanka which coincided with his Worcestershire duties at the end of the English season in 1996.

In December 1997 brought the end of an era for cricket in Zimbabwe, as Dave Houghton, at the age of 40 the oldest and one of the most remarkable players in international cricket, announced his retirement.

He took just 24 innings to reach 1,000 Test runs – fastest by a Zimbabwean cricketer. In ODIs, his numbers aren’t as flattering as he would have liked them to be. He has 1,530 runs in 63 matches at an average 26.37. Houghton also kept wickets until Andy Flower came along and took his spot behind the stumps.

After a successful stint as head of cricket of Derbyshire between 2003 and 2007, Houghton rejoined the county side as their batting coach in 2011 and helped them to a title in the Division Two Country Championship. 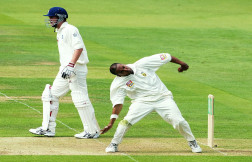