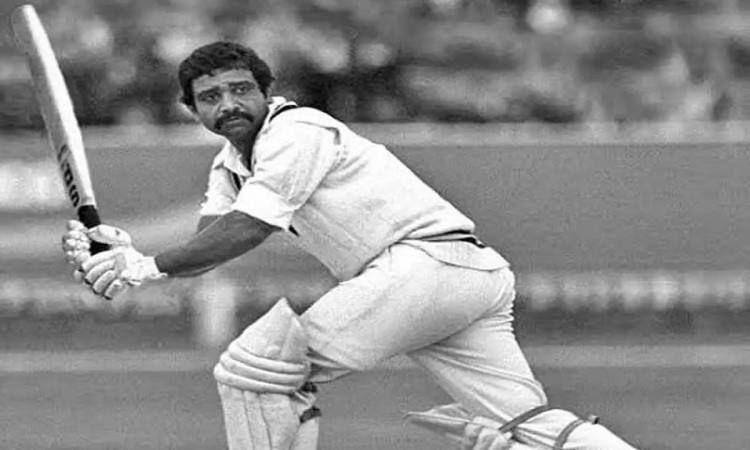 Gundappa Ranganath Viswanath is a former Indian cricketer and was one of India's finest batsmen throughout the 1970s. A right-handed batsman and a wristy stroke player, especially the late-cut, Vishwanath had the ability to play both spin and pace bowling with equal mastery and was crucial to many of India’s wins in the 1970s.

In fact, he is one player who could rightfully claim that none of his centuries ever came in a lost cause. Though statistics don't convey it, Vishy was every bit as crucial as Sunil Gavaskar to the Indian team of the 1970s.

Vishwanath, known as Vishy to his teammates and fans was born on the 12th of February 1949, in Bhadravathi in the state of Karnataka.

In 1968 in Hyderabad a young slim boy named Gundappa Vishwanath marched to the nets, facing every delivery. As a result of rainfall, the wicket was damp and the condition of the nets deteriorated. The diminutive youngster handled the rising ball with great precision playing the ball rising up to his chin down to the ground firmly. Test stars like M.K.Pataudi and M.L.Jaisimha watched him and were deeply impressed by Vishwanath. It was that very prowess which he displayed in the nets that marked the trend of this illustrious cricketer.

At the state level, he played for Karnataka throughout his career and scored 230 in the Ranji Trophy on his debut. Vishwanath went on to play for the State Bank of India team and the South Zone side.

It was against Bill Lawry's Australian team that Vishwanath made his debut in 1969 at Kanpur. He failed in the first innings but made a cracking 137 in the 2nd innings, including 25 boundaries. His wristwork was exemplary against a competent attack and the little genius proved his true mettle.

He scored 13 more centuries in his Test career and none of them came in a match that was lost. This record emphasized his importance to the Indian team. He tended to produce his best performances on difficult pitches and a number of his best innings were not centuries but were crucial to the team's cause.

He hardly made an impression on India's victorious 1970-71 tour of West Indies after suffering from a twisted knee and played only in the third test.

Gundappa reached the acme of perfection during the mid-1970. He was one of the most accomplished bad-wicket players of all time. In the 1974-75 series against the West Indies, he helped India win the third and fourth Tests after routs in the first two. At 192 for 6 in the second innings at Calcutta, India looked in danger of losing the Test and series, but he battled on with the lower order to score 139 and India reached 316 to set the West Indies an unattainable target.

The next Test, at Chennai, was Vishy's Brandenburg Concerto. Minus Sunil Gavaskar, the Indian innings was in tatters at 118 for 8 against the fiery pace of Andy Roberts. Vishy produced a classic. He added 73 with lower-order batsmen, Bishan Bedi and Bhagwat Chandrasekhar and the final total was a respectable 190. Vishy remained unbeaten on 97 - an innings which ranks 38 on the Wisden 100 (a statistical analysis of individual Test match performances carried out in 2001), one of only two non-centuries to make the list. He followed it with 46 in the second, as India won a low-scoring Test by a thumping 100 runs. Sadly, his 95 in the deciding Test at Bombay couldn't win India the series.

Another of his most memorable centuries was against the West Indies, this time in Port of Spain in Trinidad during 1975-76. India was set a target of 403 to chase down in the fourth innings. The team accomplished this task with centuries from both Sunil Gavaskar and Vishwanath. While Gavaskar set up the platform, Vishwanath stayed till the end, scoring 112 and steering the team to victory. Gundappa Vishwanath had a penchant for playing on difficult pitches and had a knack for recovering India from difficult circumstances.

On the 1976 tour of New Zealand Vishy demonstrated his prowess on bad wickets. At Christchurch, he batted with precision and scored 83 and 79. The ball was moving all over the place and Vishy showed a superb exhibition of batting. He left the good length balls and showed remarkable judgment while driving the well-pitched balls. Many good batsmen would have struggled to leave those deliveries which Vishy shouldered arms to.

Down Under in 1977-78 Vishy was the best batsman averaging over 52.5 and aggregating 473 runs. He handled Jeff Thomson with great skill on the fast and bouncy wickets of Australia.
On the 1980-81 tour of Australia and New Zealand, he was not consistent but his hundred at Melbourne was instrumental in India registering a victory from an impossible position. He brilliantly drove and cut Lillee and Pascoe and rescued a sinking ship, scoring 114 out of 237 on a tricky wicket. It was Vishy's knock that set the base for India drawing a series in Australia for the first time.

Vishy also had a brief stint as the Indian captain in 1979–80. In the two Tests he captained, one was drawn and one was lost, the latter being the Golden Jubilee Test against England. Throughout his career, Viswanath was renowned for his sense of fair-play and in this match, he recalled Bob Taylor to the crease after the umpire had already given him out. Taylor went on to score some vital runs for England helping them to win the match.

In the 1982–83 season Test Series in Pakistan, Viswanath was part of the team which lost the series 3–0. Viswanath was one of the Indian batsmen who did not fare well against the blistering pace of Imran Khan who was arguably at his peak in the series, snapping 40 wickets. This series proved to be Viswanath's last.

Vishwanath holds the Indian record for playing the most consecutive number of tests since his debut and he was also the first Indian batsman to score a century against all the Test-playing countries. Vishwanath played in the same era as Sunil Gavaskar. While Gavaskar was the more acclaimed batsman of the two, Vishwanath was no less valuable to the team when it came to winning or saving matches.

Post-retirement, Vishwanath served as a match referee for the ICC from 1999 to 2004. He was also the Chairman of the national selection committee, and also served as the manager of the Indian cricket team. He is also involved in cricket coaching at NCA. He is married to Kavita, sister of Sunil Gavaskar, and was awarded Col. C K Naidu Lifetime Achievement Award in 2009 by BCCI.