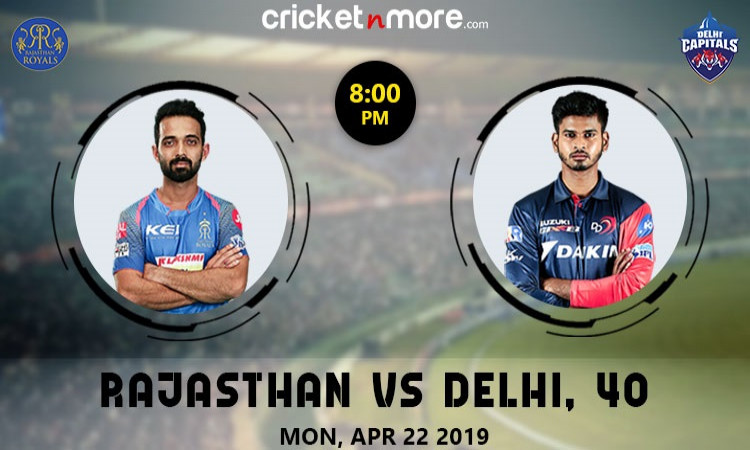 Jaipur, April 21 (CRICKETNMORE):  Having secured a much-needed victory against Mumbai Indians, Rajasthan Royals will look to continue with the winning momentum against an in-form Delhi Capitals (DC) when the two teams meet at the Sawai Mansingh Stadium on Monday.

In his first game as captain in the ongoing edition of the Indian Premier League (IPL), Steve Smith led from the front and guided his side to a consecutive fourth win against Mumbai on Saturday. Smith, taking over the leadership role from Ajinkya Rahane, scored an unbeaten 59 to help his side chase down 162 with five balls to spare.

Rajasthan have six points from nine games and need to win all their remaining games to make it to the play-offs.

On the other hand, Delhi Capitals are also riding high on confidence, having turned around their poor home form and defeating Kings XI Punjab in their last encounter.

Delhi would be hoping that Shikhar Dhawan and Shreyas Iyer, who starred with the bat against Punjab, continue with their good batting run. In the bowling department, they have purple cap holder Kagiso Rabada, who has a knack of taking crucial wickets, and spinners like Sandeep Lamichhane and Amit Mishra who have the ability to turn the game on its head.

Delhi are currently at the third spot with 12 points from 10 games and would like to win at least two more games to seal their berth in the top four.