SunRisers Hyderabad (SRH) recorded a mammoth 88-run win over Delhi Capitals (DC) in an Indian Premier League (IPL) on Tuesday, and remained in contention for a place in the payoffs. 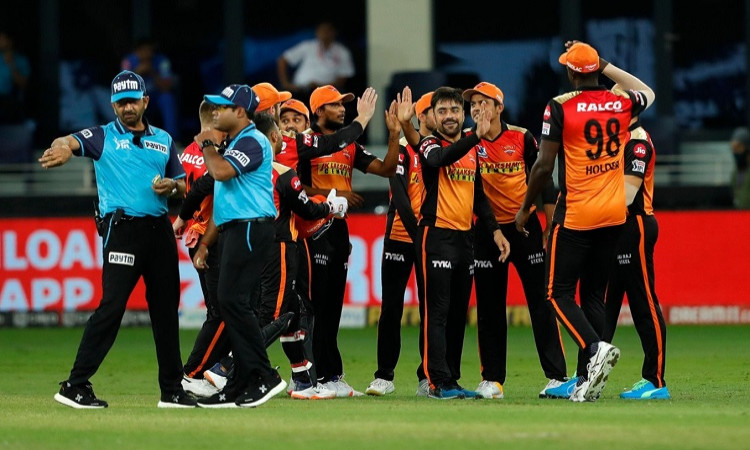 In response to 219/2 wickets, DC were blown away for 131 and succumbed to their third consecutive defeat of the season. The defeat took DC to the third place on the net run rate, though they are equal on points with toppers Mumbai Indians and Royal Challengers Bangalore with 14 points.

Sandeep Sharma dismissed the in-form Shikhar Dhawan for a first-ball duck in the first over after which Marcus Stoinis, sent in at No.3 fell to Shahbaz Nadeem in the next at the Dubai International Stadium. Rashid Khan then came in for the first over after the powerplay and took the wicket of Shimron Hetmyer off his very first ball.

Rashid played a crucial role in ending any chances of allowing DC to put up a challenge in their innings, returning with figures of 3/7 wickets in his four overs.

Earlier, SRH openers David Warner and Wriddhiman Saha played a starring role to help their team to a mammoth 219/2 wickets -- their highest of the 2020 IPL -- in 20 overs against DC.

The pair shared a 107-run opening partnership, which they got within the first 10 overs, after being put to bat. The total is the highest by any team this season in Dubai, and also marks the first time in 25 matches that DC fast bowler Kagiso Rabada went wicketless.