T20 World Cup Flashback - A Look At The Previous Editions

2007 – India become inaugural winners after final over heroics against Pakistan The first ICC Men’s T20 World Cup may have only lasted 13 days but there was no shortage of unforgettable moments. T20 World Cup Flashback - A Look At The Previous Editions

2007 – India become inaugural winners after final over heroics against Pakistan

The first ICC Men’s T20 World Cup may have only lasted 13 days but there was no shortage of unforgettable moments. The opening fixture set the tone, Chris Gayle smashing 10 sixes at the Wanderers to become the first player to make an official T20I hundred. But that still was not enough for victory, with the Herschelle Gibbs-inspired hosts chasing down 205 with 14 balls to spare.

In a high-scoring tournament, Yuvraj Singh claimed headlines when he struck six sixes in an over, with England’s Stuart Broad on the receiving end. Yuvraj’s India had already made history when they beat Pakistan via a bowl-out in the group stage and when the fierce rivals met again in the final, the outcome was the same - though no less dramatic.

Joginder Sharma was the man of the moment, holding his nerve with the ball when Pakistan required just six runs off four balls to steer his side to a five-run victory.

From agony to ecstasy, Pakistan became champions after beating Sri Lanka at Lord’s thanks to a Player of the Match performance from Shahid Afridi.

The star of the show in the semi-final with a 34-ball 50 and figures of two for 16, Afridi top-scored again at the home of cricket, his unbeaten 54 guiding Pakistan to an eight-wicket win. Lord’s was a sea of green that afternoon but it had earlier turned orange for one of the tournament’s greatest shocks.

Netherlands chased down 162 to beat England on the last ball of the tournament’s opening fixture.

Arguably the best individual display of the tournament came at The Oval, where Umar Gul’s five-for, the first in T20Is, saw Pakistan pip the Black Caps to a semi-final spot and they later returned to the capital for a first major tournament win in 17 years.

2010 – England down Australia for first ever ICC crown

Paul Collingwood’s England turned around a disappointing start to their campaign in remarkable fashion before securing the trophy in Bridgetown. They opened up with an eight-wicket loss against the hosts and were restricted to 120 batting first against Ireland.

Rain intervened, which saw England progress on net run rate at Ireland’s expense, and they then clicked into gear and advanced into the final where they met old rivals Australia.

Fittingly, it was Collingwood who hit the winning run with three overs to spare while Kevin Pietersen, who scored 47 in the final, was named Player of the Tournament.

The team’s path to the final was eerily similar to that taken by England two years earlier. After losing their opener to Australia, a clash with Ireland was washed out leaving the Windies second in the group on net run rate.

They were soundly beaten by Sri Lanka in the Super 8 stage but a Super Over win over New Zealand secured progression to the last four.

Then came revenge against the hosts in the final, Samuels shining with the bat and Sunil Narine claiming three for nine as the Windies strolled to a 36-run victory. 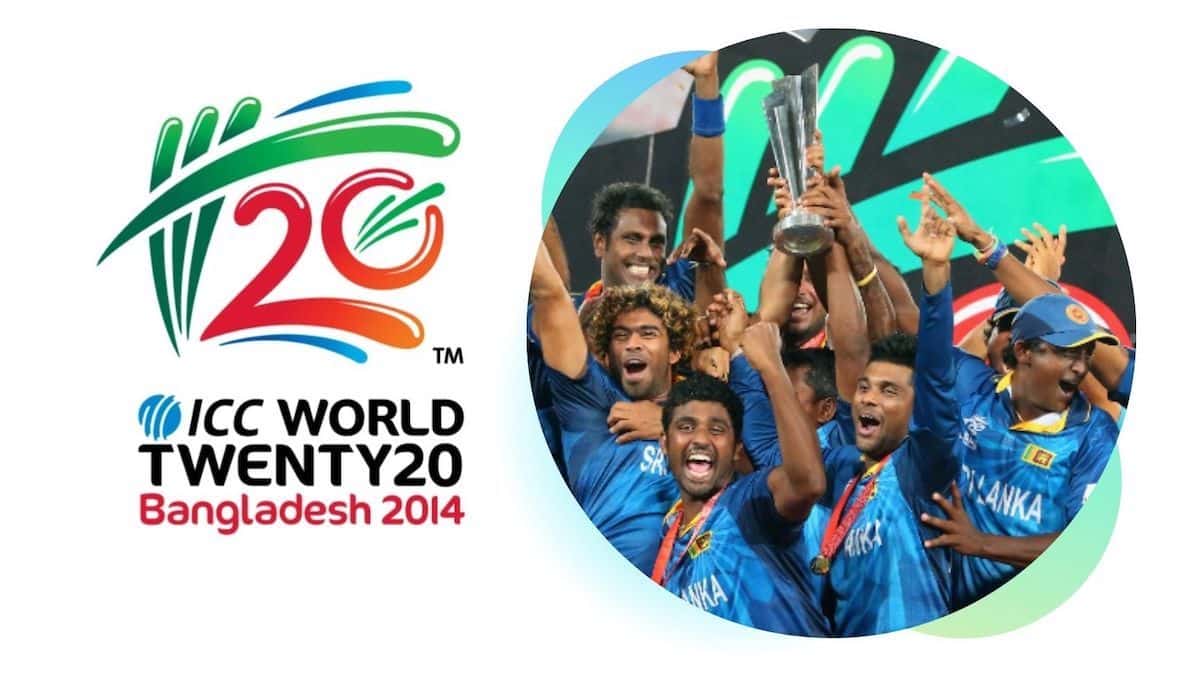 Spurred on by the disappointment of missing out on home soil, Sri Lanka went one better in Bangladesh two years later.

The Lions topped Group 1, dismissing the Netherlands for 39 and New Zealand for 60 as their bowling attack proved irresistible.

The semi-final, a repeat of the final two years earlier, saw Sri Lanka defeat West Indies to set up a clash with India which saw two icons bow out in style in their last ever T20Is.

Mahela Jayawardene became the first batter to reach 1000 ICC Men’s T20 World Cup runs before Kumar Sangakkara saw his side home with an unbeaten half-century, ensuring 77 from the tournament’s leading run-scorer Virat Kohli turned out to be in vain.

Carlos Brathwaite, remember the name. Ian Bishop’s iconic commentary provided the backdrop to a stunning performance by the Bajan, whose four successive sixes from the last over of the final led West Indies to their second ICC Men’s T20 World Cup crown.

West Indies needed 19 from the final six balls against England and Brathwaite – who had earlier taken three wickets with the ball – made light work of the challenge, Ben Stokes the unfortunate bowler.

Samuels again proved himself a man for the big occasion, named Player of the Match for his unbeaten 85, while several Windies batters stepped up at various times across the tournament.

Gayle blasted a 47-ball century in the group stage clash with England, Andre Fletcher’s unbeaten 84 inspired a seven-wicket win over reigning champions Sri Lanka and Lendl Simmons smashed 82 not out from 51 balls in the semi-final victory over India.

No country has enjoyed more ICC Men’s Cricket World Cup success than Australia but they arrived in the UAE still waiting to make their mark in the shortest format.

Having progressed through the group stage, however, Aaron Finch’s side saved their best for the knockouts and dumped out Pakistan, who came into the semi-finals unbeaten, in the last four.

The final pitted Australia against neighbours New Zealand, for whom Kane Williamson’s 85 was the standout innings in a total of 172 for four.

It did not prove enough against an in-form batting line-up, Mitchell Marsh’s unbeaten 77 from 50 balls guiding Australia to an eight-wicket success which sees them head into this year’s tournament eyeing an unprecedented title defence.