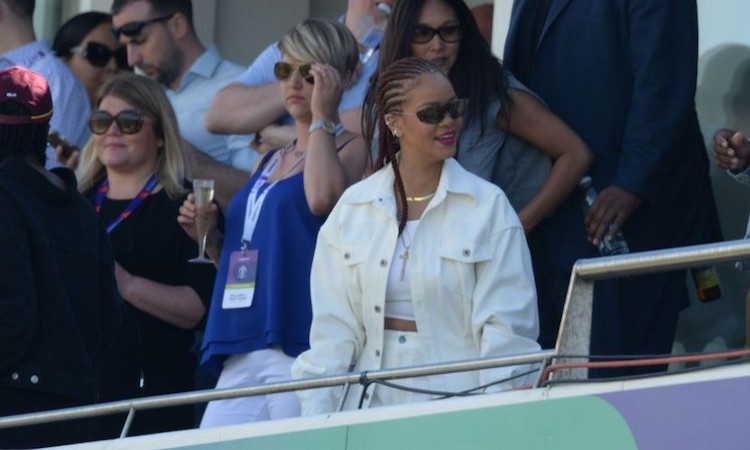 July 2 (CRICKETNMORE) - Rihanna came to the Riverside to rally round the West Indies and they rewarded her with a brave batting display that fell just short of being an ICC Men’s Cricket World Cup record chase.

Sri Lanka’s exciting 23-run victory might have no bearing on qualification for the semi-finals but another capacity crowd in Durham got more than their money’s worth and witnessed statement innings by two of the game’s rising stars.

The Barbadian singer stood at the front of a hospitality box, hands clasped in nervous excitement as the Windies threatened to produce one of the turnarounds of the tournament.

“I want to thank her personally for coming out to support us – it was a pleasant surprise,” said West Indies captain Jason Holder.

“I’m sure the guys felt her presence in the stands and she came down to the dressing room to meet quite a few of the players which was really refreshing. It can’t be easy for a celebrity.”

Rihanna was perfectly placed to see Nicholas Pooran pass his previous ODI highest score of 63 as he waspishly flicked a six off Kasun Rajitha over mid-wicket and into the crowd just below where her viewpoint.

Pooran, 23, matched Sri Lanka’s emerging star, Avishka Fernando, in more ways than one. The Trinidadian left-hander also scored his maiden one-day international century and he too was playing only his ninth ODI.

But this was bigger still for Pooran – his highest score in any senior cricket. The similarities with his fellow Trinidadian Brian Lara are well known and clear for all to see, though Pooran is a product of his time. He has played only three first-class matches but more than 100 T20 matches and more than 50 one-day matches.

But the batting style is Lara-esque and glorious to behold. Small of stature, with an angular stance, the driving is smooth and decisive but even the brutality is beautiful.

He hit straight sixes with the ease of a golf swing and even the pull over the ropes to the longest mid-wicket boundary seemed to be made with minimal effort.

“Nicholas played maturely and it wasn’t a surprise to me to see him perform like that,” added Holder.

“He has every shot in the locker and I expect big things from him. The young talent is there but it’s down to us to bring manage that talent and bring it all together.”

It is hard to overstate the remarkable nature of the result. West Indies’ body language towards the end of the Sri Lanka innings suggested deflation and by the time Pooran was joined by his captain, the Windies were 84/4 with Shimron Hetmyer run out after being sent back by Pooran. Victory was on no one’s minds.

There were more run-outs, though Carlos Brathwaite could not believe his luck when Pooran’s blistering straight drive was tipped on to the stumps by the bowler Isuru Udana.

But worse was the departure of Fabian Allen, the 24-year-old left-arm spinner also playing in his ninth ODI, whose uninhibited hitting had brought West Indies back into the game.

Having made 51, his highest score in a West Indies shirt, he failed to respond to Pooran’s call for a quick single and was run out by the length of the pitch.

Allen and Pooran had put on 83 for the seventh wicket in under 10 overs but Allen’s departure was a body blow.

And when Pooran was caught behind – off Angelo Mathews’ first ball in an ODI for 18 months – West Indies’ hopes of pulling off this remarkable win disappeared.

He had made 118 from 103 balls and, like Fernando before him, given the crowd some unforgettable memories.

And crowds in England will be able to enjoy more of him this summer as he turns out for Yorkshire Vikings in county cricket’s T20 Blast competition.

Meanwhile, Holder urged his young players to become the ‘rock and soul’ of West Indies cricket, starting with their final match against Afghanistan in Leeds on Thursday.

“We cannot let the talent go to waste, it is our responsibility to make sure harness it as best we can and make sure we get better,” he added.

“If we don’t do that we will come here in four years and see similar results. We need to put things in place for them to be able to develop.”