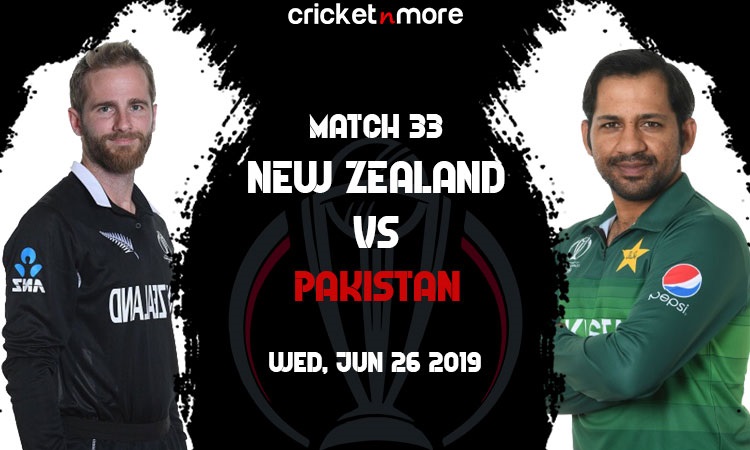 Birmingham, June 25 (CRICKETNMORE): Pakistan will play another must-win game when they take on New Zealand, the most consistent team in the World Cup so far, in their crucial encounter at Edgbaston on Wednesday.

Pakistan have played according to their 'unpredictable team' tag in the tournament so far. They have registered wins against tournament favourites England and South Africa. However, they have also conceded comprehensive defeats against West Indies, Australia and India. Their game against Sri Lanka got washed out and now they have five points from six games. They need to win all their remaining three games and also hope that results of matches of other teams go in their favour so that they can make it to the last four stage.

Pakistan's batters and bowlers have performed in bits and pieces in the World Cup so far. Their bowling has mostly relied on left-arm pacer Mohammed Amir while their batting revolves around the likes of Hasan Ali, Babar Azam and Fakhar Zaman. However, the main concern for Sarfaraz Ahmed should be their fielding.

The 1992 champions have dropped as many as 14 catches in the six games they have played so far and they need to come up with a much improved performance if they want to beat the Kiwis which are one of the best fielding sides of the world.

On the other hand, New Zealand have been a team which has improved constantly with each passing game. Their batting is led by skipper Kane Williamson who has been in tremendous form and has already scored two daddy hundreds.

Their bowling, too, looks in fine touch with Lockie Ferguson, Trent Boult and Mitchell Santner all chipping in with wickets at crucial junctures of the games. With 11 points from six games, the Black Caps are sitting pretty at the top of the table and the win against Pakistan will seal their semifinal spot.