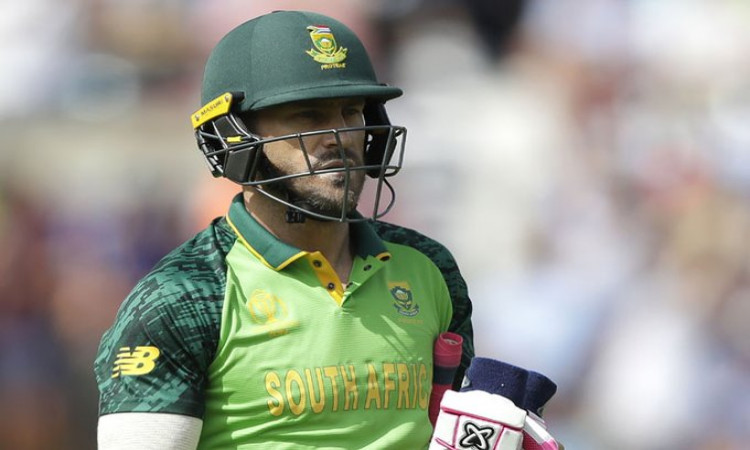 Capetown, June 4 (CRICKETNMORE) After South Africa's second consecutive defeat in the ongoing ICC Cricket World Cup 2019, a frustrated former Proteas all-rounder Jacques Kallis has said that the Faf du PLessis-led side have no further margin for error as they have remained winless so far.

After suffering a humiliating 104-run defeat to hosts England in the tournament opener, the Proteas had to undergo an embarrassing 21-run loss to Bangladesh at The Oval on Sunday. After conceding 330/6 in the allotted 50 overs, South Africa could only manage to reach 309/8.

"I think you've got to give credit to Bangladesh for the way they performed, it's amazing how far they've come as a team in a very short space of time and the way they batted was particularly impressive," Kallis wrote in his ICC column.

"Hindsight is a wonderful thing, but I understand what Faf du Plessis was doing with the toss and playing the extra pace bowler. However, the wicket just didn't allow it and perhaps he stuck with the tactics a bit too long and should have started bowling a little fuller and straighter.

"Bangladesh got all their partnerships going and once you get over 300 then it always become a tough chase, letting them score 50 or so runs in the final four overs really didn't help either and ultimately proved the difference."

Kallis further said that South Africa now needs to win every game to remian alive in the showpiece event.

"It's disappointing and frustrating and there is lots of pressure on the next game, otherwise the tournament could be over before it's really started for South Africa," he opined.

"The good news is we have another game in just three days, so South Africa can't dwell on this, they will just have move on. It doesn't get any easier though against India but it's their first game and our third, so maybe that could give us the edge we need," Kaliis added.

"They've not played for a week and maybe they'll be some first game nerves, where as we are settled. Strange things happen in this sport and if we can get a win then I think we can go on a streak and we are still good enough to be a contender.

"There will be no margin for error though. I think you'll need six wins, maybe five with a really good run rate, to finish in the top four, so South Africa almost need to win every game they will play."

"It's great having a game plan but you need to have a back-up when it's not working, I felt we were one step behind the entire match and just tactically a bit off. We need to be a bit smarter," Kallis said.

"Bangladesh took it on and were aggressive and the wicket really suited their bowling too. I was really impressed by Shakib Al Hasan, he's a seriously talented and clever cricketer."

The du Plessis-led side will nect face off India at the Rose Bowl, Southhampton on Wednesday.