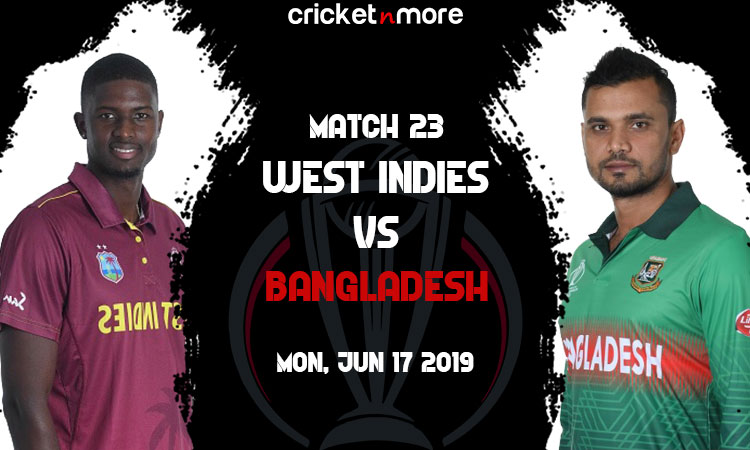 June 17 (CRICKETNMORE) After suffering two defeats in their last three fixtures, both West Indies and Bangladesh will aim to return back to winning ways when they face each other in their crucial World Cup tie at the Cooper Associates County Ground, here on Monday.

Both teams announced themselves at the ongoing tournament with convincing victories, but have failed to build on to that success.

Also Read: It's getting tougher and tougher, admits Sarfaraz

After beating Pakistan in their tournament opener, Windies have failed to live up to the aggression and lost their next matches against Australia and England, while their game against South Africa was washed out. Their bowlers have performed reasonably well in all their matches, but it's their batting which has left the fans disappointed.

Having one of the most attacking batting line-ups, Windies have reaped the results of their poor shot selection from the likes of Chris Gayle, Andre Russell and others. As a result, they are placed at the sixth spot with three points from four games.

On the other hand, Bangladesh's success has revolved around Shakib al Hasan. The number one ODI all-rounder has not only performed with the bat and has been the backbone of Bangladesh batting.

Their bowlers have failed to rise to the occasions and have been unsettled by the attacking brand of cricket played by the opposition, especially England who posted a mammoth total of 386/6 in the allotted 50 overs.

And so, skipper Mashrafe Mortaza will hope for an improved performance from his bowlers so that they can register their second victory of the tournament and move up the table.