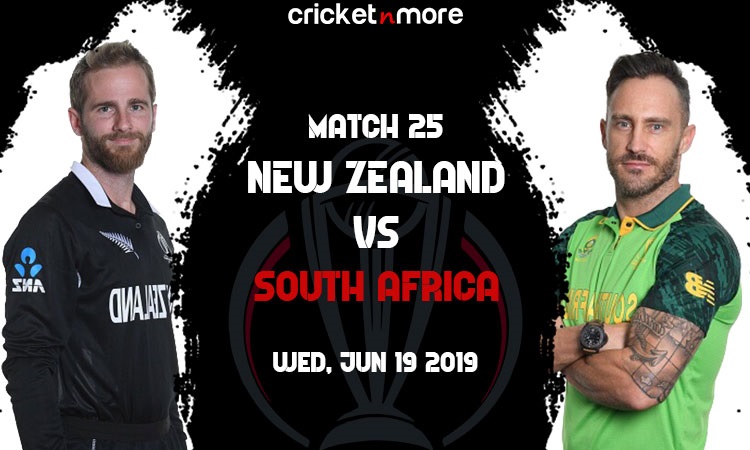 Birmingham, June 18 (CRICKETNMORE):  After registering their first win of the ongoing World Cup against Afghanistan, South Africa will look to keep their hopes of qualifying for the semis alive when they face unbeaten New Zealand in their sixth fixture at Edgbaston on Wednesday.

After losing their first three matches, Proteas came out with a much-improved performance and registered a nine-wicket win over Afghanistan in their last game. While leg-spinner Imran Tahir produced another match-winning spell by picking up four wickets, the century-stand put on by openers Quinton de Kock and Hashim Amla was probably the greatest positive for Faf du Plessis' men. But the top-order will need to continue to shoulder responsibility and make sure they have enough runs on the board for the bowlers to have something to defend.

South Africa's bowling will be bolstered by the return of young Lungi Ngidi. The pacer had to miss the last two matches because of a hamstring injury. Another thing that can inspire du Plessis's men to win in Birmingham is their opportunity to take revenge of the 2015 World Cup semi-final loss when Grant Elliot played a superb knock to help the Kiwis earn a summit-clash spot, which they eventually lost to Australia. On that day, the likes of AB de Villiers, Morne Morkel and du Plessis were seen in tears and thus, the Proteas would hope to avenge that loss and bring smiles on the faces of the South African fans.

On the other hand, New Zealand have been absolutely professional in their approach so far and are sitting at the second spot in the points table with seven points. They started their World Cup campaign with three consecutive wins before their fixture against India ended in a wash-out at Trent Bridge.

The bowlers, consisting Trent Boult, Tim Southee and Lockie Ferguson, have been exceptional and have restricted the opposition to below-par totals, thus making it easier for their batters.

However, the only thing they need to worry about is their middle-order, which failed considerably against Bangladesh before Mitchell Santner finished the job. It will definitely be put to a stern test against the Proteas bowlers, especially Kagiso Rabada.