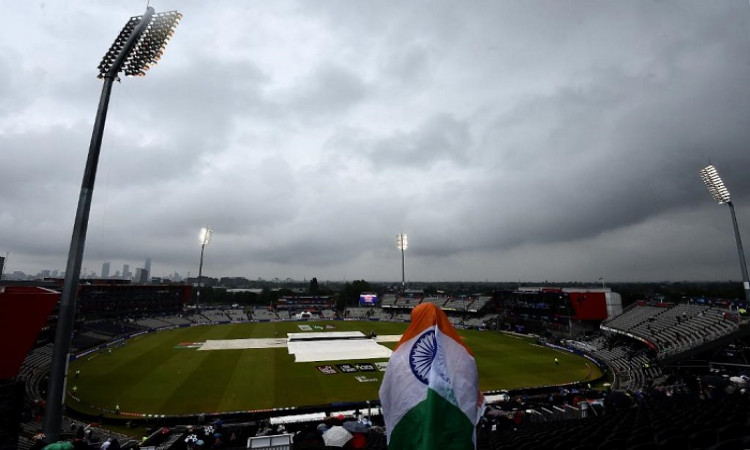 Manchester, July 9 (CRICKETNMORE):  Rain stopped play in the first semifinal between India and New Zealand at the Old Trafford on Tuesday with the Kiwi scoreboard reading 211/5 after 46.1 overs. New Zealand will resume their innings on Wednesday on the same score with 23 balls of their innings still remaining.

Ross Taylor was unbeaten on 67 off 85 balls when the umpires decided the players needed to head back to the pavilion.

As per the rain rules of the International Cricket Council for the semifinals and the final, the umpires must try to complete the match on the scheduled match day by using the available extra time (120 minutes) and by reducing the number of overs down to a minimum of 20 overs per team in order to achieve a result.

A tied match will use a super over to determine the winner. If the semifinal doesn't reach a result even after the scheduled day and the reserve day, the higher placed team from the league stage will progress to the final, which in this case will be India.

Back to the New Zealand innings, slower bouncers, cutters and the knuckle balls ruled the roost as the Indian bowlers showed why they are considered one of the best in world cricket at present.

Even as the team management surprised many by deciding to drop the in-form Mohammad Shami, the trio of Jasprit Bumrah, Bhuvneshwar Kumar and Hardik Pandya showed that they were up for the challenge.

New Zealand skipper Kane Williamson scored a fighting 95-ball 67 as the Kiwi batsmen found the going extremely tough on the slow wicket on offer. Ross Taylor played a hand as well, scoring an unbeaten 67 off 85 balls before rain stopped play with 23 balls left in the New Zealand innings.

For India, Ravindra Jadeja was the standout performer, giving away just 34 runs from his 10 overs. He also picked up the wicket of Henry Nicholls (28). While Bumrah started the show by dismissing Martin Guptill for 1, Yuzvendra Chahal snared the all-important wicket of Williamson.