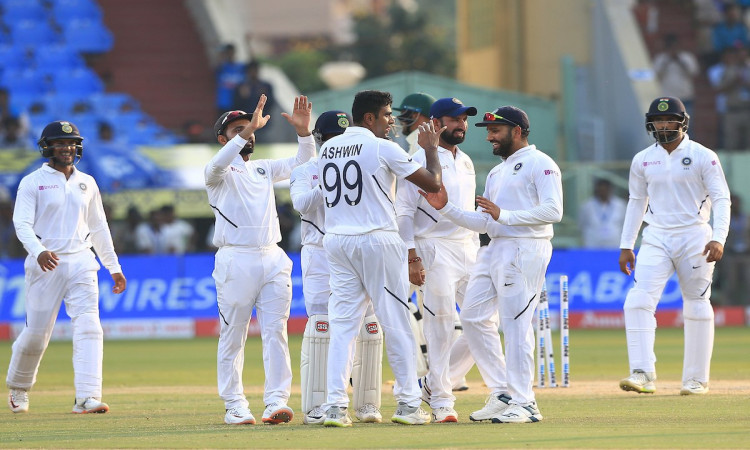 Visakhapatnam, Oct 3: The pitch at the ACA-VDCA Stadium has started taking turn and the duo of R. Ashwin and Ravindra Jadeja have already shown signs of what the South African batsmen can expect in the remainder of the first Test as the duo had the Proteas batsmen huffing and puffing in the third session of the second day's play on Thursday. At stumps, South Africa's score read 39/3 with Dean Elgar (27) and Temba Bavuma (2) at the crease, still trailing by 463 runs.

With India skipper Virat Kohli declaring the innings at 502/7, the idea was to give the spinners a go before stumps to assess what the pitch has on offer and the duo of Ashwin and Jadeja didn't disappoint. While Ashwin finished with two wickets, Jadeja's figure read 1/21.

The Proteas lost three wickets in the 20 overs that they faced and the struggle was there for all to see as the experienced spinners not only got the odd ball to stay low, but also extracted decent turn from a second-day wicket. Not to forget the ones that jumped after hitting the cracks.

The South African batsmen looked to play attacking shots to try and unsettle the Indian spinners, but didn't have much success. The Indian pacers also complemented the spinners well and kept the pressure going as Ishant Sharma and Mohammed Shami kept hitting the right areas to not allow the batsmen to free their arms.

Earlier, it was all about the Indian openers carrying on from where they left on the opening day. If it was the Rohit Sharma show in the morning session, the afternoon session belonged to his opening partner Mayank Agarwal. Having played second fiddle till Rohit made hay, the youngster rose to the occasion after Rohit's dismissal to notch his first double hundred in Test cricket as the hapless Proteas bowlers went through the paces.

While Rohit hit a magnificent 176 (23 boundaries and six sixes), Mayank finished on 215. The duo added 317 runs for the opening wicket, becoming the third Indian opening pair to stitch a 300-run partnership.

The only silver lining in the dark clouds for the visitors was the four wickets they managed to pick in the post-lunch session as the first two sessions were otherwise completely dominated by India.

Cheteshwar Pujara (6), Kohli (20) and Test deputy Ajinkya Rahane (15) missed out as Keshav Maharaj finished with figures of 3/189 to be the most successful bowler for the visitors.