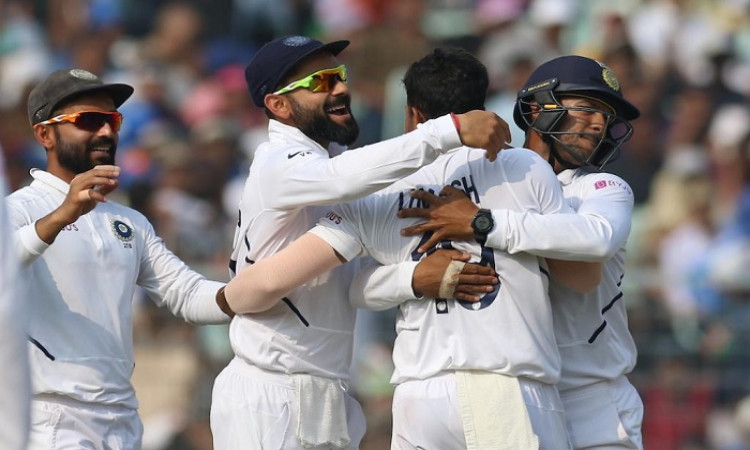 Kolkata, Nov 24: Virat Kohli and his quick bowling trio trampled Bangladesh by an innings and 46 runs to clean sweep the series 2-0 in their maiden pink ball Test at the iconic Eden Gardens here on Sunday.

This was India 12th consecutive home series victory as they also became the first team ever to complete four successive innings victories in the five-day format. India had won the first rubber by an innings and 130 runs.

After India declared their first innings on 347/9 on Saturday, Bangladesh slumped to 14/3 by the seventh over and risked losing the match inside two days.

But Mushfiqur Rahim and Mahmudullah, who made 39 before a hamstring injury forced him to retire hurt, forced a third day's play as they went into stumps at 152/6.

It then took India less than an hour to wrap up proceedings as Mushfiqur top-scored with a fighting 76 before holing out to Ravindra Jadeja at covers off Umesh Yadav who returned figures of 5/53. All other batters fell around him as Mahmudullah could not come out to bat.

Ishant Sharma, who claimed 5/22 in the first innings, was the wrecker-in-chief in the second as well, returning 4/56 with an impeccable display of seam bowling.

Bangladesh were shot out for 106 in the first innings and trailed their hosts by 89 runs. They resumed the third day at 152/6, still trailing by 89 runs. Ebadat Hossain walked out to bat with Mushfiqur but it took Umesh little time to have him caught by Kohli at slips.

Rahim was next to go as he tried to be aggressive and up the ante. Al-Amin Hossain was the last to go as he was caught behind by Wriddhiman Saha off Umesh.

Earlier, Kohli slammed a magnificent 136 and added 99 runs with his deputy Ajinkya Rahane who fell for a fluent 51. On Day 1, Cheteshwar Pujara also struck a similar 55.

The India captain cover-drove Ebadot Hossain to reach 99 and, with the crowd chanting his name, took two off spinner Taijul Islam to bring up his 27th test century, and 20th as captain.

The talismanic batsman, who now has back-to-back tons at Eden Gardens with the last coming against Sri Lanka in 2017, took 159 balls to get to his century.

Kohli shifted gears after getting to his hundred and hit Abu Jayed for four consecutive fours before Ebadat removed him with Taijul moving from deep square leg and hurling himself into the air to take a stunning catch.

Kohli hit 18 fours in his 194-ball vigil, which was more than the entire Bangladesh team who had folded in 30.3 overs in their first essay.

Bangladesh have had to call two concussion substitutes after Liton Das and Nayeem Hasan sustained nasty blows to the helmet in the first innings and Mohammad Mithun also took a knock due to visibility being an issue under lights. Mushfiqur too was hit on the helmet.