Virat Kohli argues with umpire over DRS during Afghanistan win 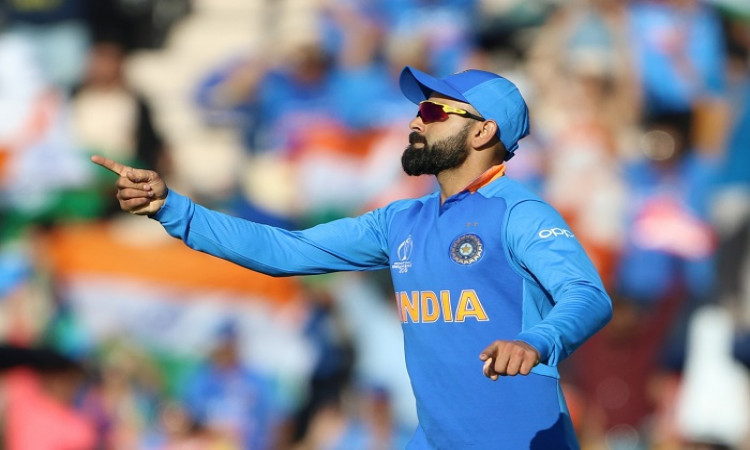 Southampton, June 23 (CRICKETNMORE):  Considering the form India had been in the ongoing World Cup, it was predicted by almost all the fans and cricket pundits that the game against Afghanistan would be a cakewalk for the Men in Blue and they will defeat their Asian opponents quite easily.

On the contrary however, Afghanistan gave India a run for their money as the two-time world champions had to bowl out of their skin to earn the victory on Saturday.

There were numerous moments during Afghanistan's chase of 225 where Indian skipper Virat Kohli was seen getting animated, anxious and even arguing with umpires in desperation of getting wickets in Southampton.

One such incident happened during the third over bowled by Mohammed Shami, who was included in the side in place of injured Bhuvneshwar Kumar.

Shami bowled a full-length straight delivery to Afghanistan opener Hazratullah Zazai that seemed to have caught him right in front of the stumps and the Indian players appealed straightaway which was turned down by umpire Aleem Dar.

Displeased by this, Kohli went straightaway to the umpires and was seen arguing with them as he believed that more than 50 per cent of the ball had pitched within the stumps. However, it was not the case.

However to India's good, Zazai failed to add much to the total as he was sent back by Shami in seventh over at his individual score of 10.

Earlier, the famed batting line-up of India was found wanting against the Afghan spinners on a sluggish Ageas Bowl wicket and could manage only 224 in their 50 overs.

It was the Indian bowlers, particularly Jasprit Bumrah and Shami, who came out with a brilliant performance and helped the team earn a nervy 11-run victory in a thrilling contest.

India now have nine points from five games and are placed third in the points table behind New Zealand and Australia.