The Trinbago Knight Riders once again showed that they are a formidable squad, not just an XI, as even with four changes, Sunil Narine still rested and Colin Munro injured, they put together a superbl 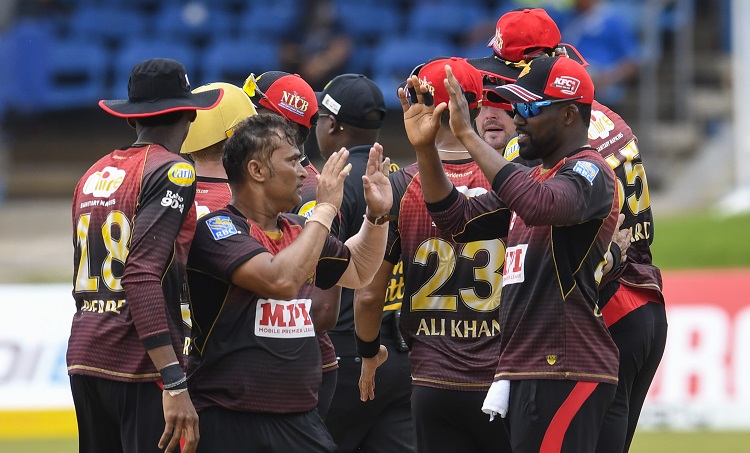 The Trinbago Knight Riders once again showed that they are a formidable squad, not just an XI, as even with four changes, Sunil Narine still rested and Colin Munro injured, they put together a superbly planned and executed performance to bowl out the St Kitts & Nevis Patriots inside 19 overs and chase their modest target inside 12 overs, thus completing a perfect 10 for 10 record in the league stage of  Caribbean Premier League (CPL) 2020.

Kieron Pollard countered Rayad Emrit’s decision to bat first by putting himself in at bat-pad for both Akeal Hosein and Sikandar Raza’s first overs. Chris Lynn did hit Hosein for a  Maximum over mid-on, but two balls later he failed to clear deep midwicket even with a favourable breeze and a short boundary. After three overs, the Patriots were 13/1.

Evin Lewis chewed up deliveries, still scoring at only three an over even after sweeping Hosein for six, and it was not a surprise when he hacked at Raza and gave keeper Tim Seifert an easy catch off the top-edge. Lewis faced 19 dot balls in his 24 ball innings, and contributed to a Powerplay in which the Patriots stuttered to 27/2.

Ben Dunk too fell to a top-edge, Pravin Tambe taking an outstanding catch at short-third man off his fellow leg-spinner Fawad Ahmed. Tambe got a wicket of his own, skidding one on to trap Joshua da Silva LBW, and Fawad trapped the promoted Imran Khan in similar fashion for a duck. Emrit and Denesh Ramdin did at least break a run of four straight overs with a wicket falling, but at halfway the Patriots were 36/5, and every over had been bowled by spinners on a perfectly serviceable pitch.

Ramdin showed intent to resist, smashing Fawad for a flat  Maximum over the short leg-side boundary, but in between that and the previous boundary the Patriots had lost 4/15 in 35 balls. Tambe’s third over went for just four, and in the 13th over the fit-again Ali Khan came on for the game’s first over of pace and struck third ball, Ramdin finding Darren Bravo on the long-on boundary. Tambe bowled out going for just one, leaving the Patriots 64/6 after 14.

Anderson Phillip’s first over went for just two, and Fawad picked up two wickets in his last over to finish with his best ever  CPL figures. If Emrit was unlucky to edge onto pad and see the ball roll onto the stumps, Colin Archibald’s stumping was all due to Seifert’s poise waiting for the moment the foot lifted. Alzarri Joseph swung a  Maximum over Hosein’s head, but soon after picked out Phillip at long-off, and the Patriots were 75/9 off 17.

A leg bye took the Patriots past their lowest ever  CPL total, 75 away to the Jamaica Tallawahs in 2016, but Phillip soon put the innings out of its misery. It was the first innings in  CPL history where a team did not hit a single four.

Tion Webster, in contrast, hit two fours off Sheldon Cottrell in the first over of the chase. With Narine and Lendl Simmons rested, Amir Jangoo got another game and started calmly, not allowing many dot balls and giving strike to the fluent Webster, who hit Imran for two more fours to take the Knight Riders to 27/0 off four overs. Jon-Russ Jaggesar was tight in both his overs, but Webster and Jangoo both hit Joseph for fours to take the Knight Riders to 42/0 off the Powerplay.

Webster was mostly content to hit through rather than over the field, but did launch Joseph onto the grass bank for a  Maximum to take the Knight Riders opening pair past 50 - remarkably, the first time they had done so for the first wicket all season - but Jangoo fell to Emrit next ball to end the stand at 54. Seifert joined Webster, and the Knight Riders coasted to 63/1 at halfway, needing just 15 more to win.

Seifert finished the innings in style with a  Maximum, consigning the Patriots to just three points from the group stage, and emulating last season’s perfect league stage from the Guyana Amazon Warriors to march undefeated into Tuesday’s semi-final against the Jamaica Tallawahs. A team with two world-class spinners and Andre Russell can never be discounted, but the Knight Riders machine will take some stopping.