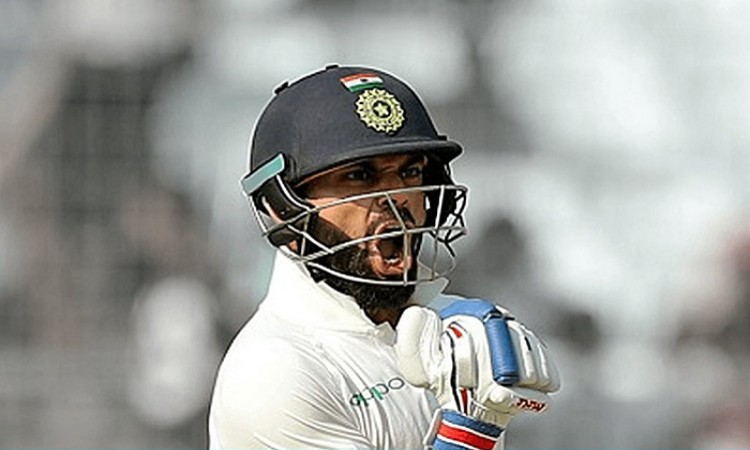 Nagpur, Nov 26 (CRICKETNMORE):  Captain Virat Kohli (123 not out) helped India reach 404/3 in their first innings till lunch on the third day of their second cricket Test against Sri Lanka at the Vidarbha Cricket Association Stadium here on Sunday.

Kohli, who cracked his 19th Test century, shared a 183-run stand for the third wicket with overnight centurion Cheteshwar Pujara, who got out just before lunch for a well-made 143.

India now have taken a massive first-innings lead of 199 runs which puts them in a commanding position with eight sessions of the match to go.

Resuming the day at 312/2 and a lead of 105 runs, India rode on Kohli, who had an overnight score 54. The Delhi right-hander scored the bulk of the runs for India as Pujara added only 22 runs to his overnight individual score of 121 not out.

While Pujara was all about patience, Kohli was at ease, taking on the Sri Lankan bowlers at will. He found scoring easy as the Sri Lankans opened up the field, feeling the need to restrict the boundary shots. It meant that singles and doubles were always available for the Indian batting pair.

Facing the 130th delivery of his innings, Kohli flicked a delivery from paceman Suranga Lakmal to the mid-wicket to bring up his century, his second in as many matches.

Pujara was a perfect partner for Kohli as the former gave stability to the innings, especially in the morning session which was important to determine the expansion of India's lead.

The Saurashtra right-hander was finally dismissed three overs before the end of the lunch session. He was late to react to a yorker-length delivery from pacer Dasun Shanaka as the ball rattled his stumps. His knock was studded with 14 fours out of the 362 balls he faced.

Ajinkya Rahane (0 not out) was with Kohli in the middle when the umpires called for lunch.