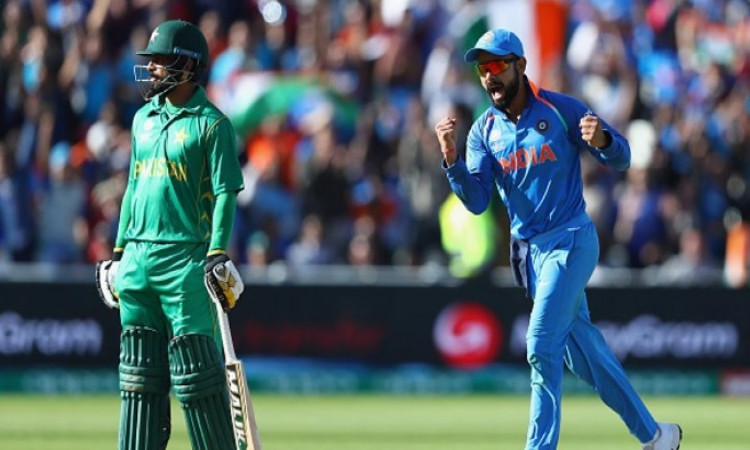 June 15 (CRICKETNMORE) With just a day to go for the much-anticipated, high octane World Cup clash between India and Pakistan, cricket fans across the globe are praying that the rain gods stay away from Old Trafford on Sunday.

So far, four matches have been abandoned in the ongoing World Cup, including India's last fixture against New Zealand. The game in Trent Bridge was called off without a ball being bowled.

Two days before the India-Pakistan clash, Manchester received heavy rainfall. The pitch was under the hover cover and the square was covered by sheets. However, few hours later, the rain went away and there was bright sunshine. This has raised hopes of the cricket fans who have come in from all parts of the world to witness one of the greatest cricket rivalry.

But, it has been forecasted that light showers are on the cards on Sunday afternoon, thus affecting the marquee clash between the arch-rivals. Considering the unpredictability of the English weather, anything is possible.

As per the weather forecasting website, Accuweather, spotty showers are to take place between 12 pm and 1 pm (local time). The website further predicted that the conditions will remain overcast throughout the day with the temperature hovering around 17 degree Celsius.

The International Cricket Council (ICC) has already been drawing flak for the poor scheduling and lack of reserve days for the league stage matches and in case the India-Pakistan clash is washed out, one can be pretty sure that a lot of eyebrows will be raised towards the international governing body.

On the field, India enjoy the perfect record when it comes to World Cup clashes against Pakistan. Both the teams have met six times and the Men in Blue have emerged victorious on all six occasions.