South Africa stumble even before the 'choke' this time round 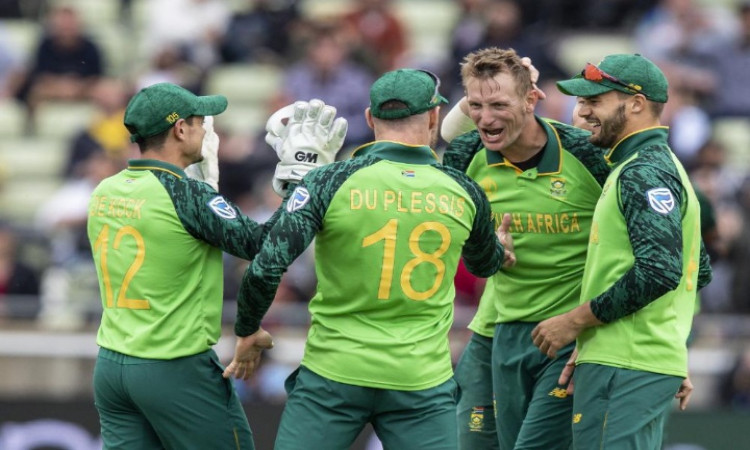 June 20 (CRICKETNMORE) If one goes by the track record of South Africa in ICC tournaments, especially the World Cup, they will find that the Proteas have never been able to achieve the success they would have liked, considering the talented cricketers the country has produced over the years.

If rain broke their hearts in the 1992 edition of the World Cup in Australia, a devastating run out ended their campaign in 1999. And over the years, their failure to rise to the challenge on the big stage has seen them being branded as 'chokers'.

But in this edition of the World Cup in England and Wales, the Proteas failed to even get started, much like their performance at home in the 2003 edition. Despite having world-class players like Faf du Plessis, Kagiso Rabada, Quinton de Kock and Hashim Amla in their squad, the Proteas' journey in the ongoing tournament has been something which they would like to forget at the earliest.

Before the World Cup, many including the likes of Paddy Upton (former performance director of South Africa and India) and Ottis Gibson (current coach), had insisted that the 'chokers' label attached to the Proteas was "exaggerated" and had expected the team to leave it behind. Most of the cricket pundits were off the view that du Plessis' men would be the fourth team which will end up playing the semis -- India, England and Australia being the other three.

However, to everyone's surprise, the performance by the South African unit has left both the fans and former players devastated.

Their campaign started on a horrendous note wherein injuries to their key players like Dale Steyn and Lungi Ngidi just didn't help their cause. Result, they went on to lose their first three games. In their tournament opener, they were literally thrashed by hosts England. They seemed to be no match for the resurgent English side which has been on a roll ever since their early round exit in the 2015 World Cup.

From that game, their confidence took such a beating that they faced defeat against Bangladesh in their next game, leaving many in the cricket fraternity shell-shocked. First, they conceded 330 at the Oval and then despite having a formidable batting line-up, failed to chase down the total and went on to lose the game by 21 runs.

The defeat dented their morale to the core, especially of their batters, who showed no application and trust on their batting technique and surrendered before a strong Indian bowling line-up in their next game in Southampton. Barring Chris Morris, none of the batsmen were able to tackle the pace and bounce of Jasprit Bumrah. They were left bemused before the duo of Yuzvendra Chahal and Kuldeep Yadav and were restricted to a below-par total of 227 which the Men in Blue chased down riding on an unbeaten century from Rohit Sharma.

It was because of the rain gods that the Proteas managed to open their account in the points table as their fourth game against West Indies got washed out and points were shared. In their next game against Afghanistan, their bowlers came to the party as they bowled out the Asian team for 131 and then went on to chase the target. It was the first and only match in which both their openers were able to spend a decent amount of time at the crease and score some runs.

However, they again returned to where they started and came out with a poor show against New Zealand. Besides their below-par batting performance, what hurt Proteas the most against the Black Caps was their sloppy fielding. They lost a number of chances against Kane Williamson and Colin de Grandhomme which ultimately cost them the game.

After the New Zealand game, skipper Faf admitted that their batting, especially that of the senior players, have been poor which has eventually contributed to their dismal performance in the showpiece event.

With just three points from six games, South Africa are almost down and out of the ongoing tournament. Although, the doors for the semi-finals have still not been mathematically shut, it would require a great set of extra-ordinary results going their way if they have to end up in the top four after what has been a horrid run to say the least.