Manchester, July 7 (CRICKETNMORE):  Opener David Warner's (122) century followed by stumper Alex Carey valiant (85 off 69) was not enough to help Australia overhaul the 325-run target against South Africa in their last group affair at the World Cup 2019 here on Saturday. 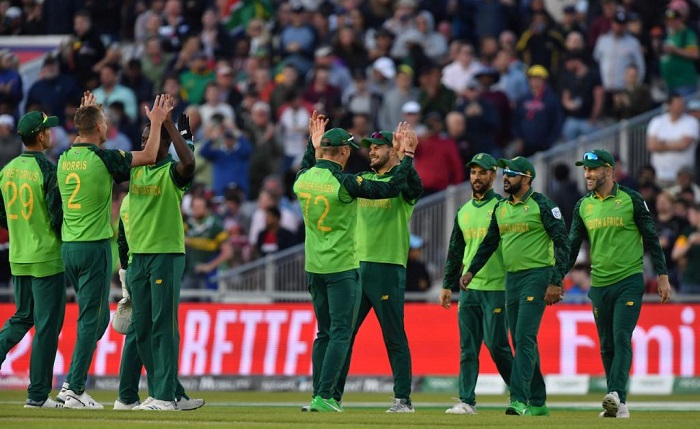 The Proteans had the last laugh in the affair as their bowlers rose to the occasion and their discipline effort restricted the defending champions and tournament favourites at 310. Kasigo Rabada was the pick of the bowlers with figures of 3/56.

Chasing the target, Australia lost in-form opener Aaron Finch early with just five runs on board and things went worse for them as the Aussies as they lost Steve Smith, Marcus Stoinis (22) and Glen Maxwell (12).

Warner kept one end intact but lacked support from the other end before Carey stepped up to show his class. Warner fell in the 40th over but Carey kept Australia's hope alive however, he too departed in the 46th over as the defending champions lost the affair by a meagre 10 runs.

Earlier, South Africa rode a super batting effort from their top order to post a challenging 325/6 in the last round-robin league match of the 2019 ICC World Cup against defending champions Australia here on Saturday.

Skipper Faf du Plessis led the Proteas' charge with a century. He was South Africa's top scorer with 100 runs off 94 balls. His innings was studded with seven boundaries and two sixes.

He posted a 151-run partnership with Rassie van der Dussen to set the base for a big total. Rassie posted a steady 95 off 97 balls.

Earlier, South Africa were off to a quick start with openers Quinton de Kock and Aiden Markram adding 79 runs between them in just 11 overs.

Markram scored a well-made 34 before being outfoxed by Nathan Lyon. Quinton went on to complete his half-century before Lyon accounted for him as well.

However, the South African lower order could not rise to the occasion as the Australians claimed regular wickets late in the innings.