Despite a five-wicket haul from Suranga Lakmal, the West Indies remain on top in the first Test against Sri Lanka thanks to a maiden Test half-century from Rahkeem Cornwall. 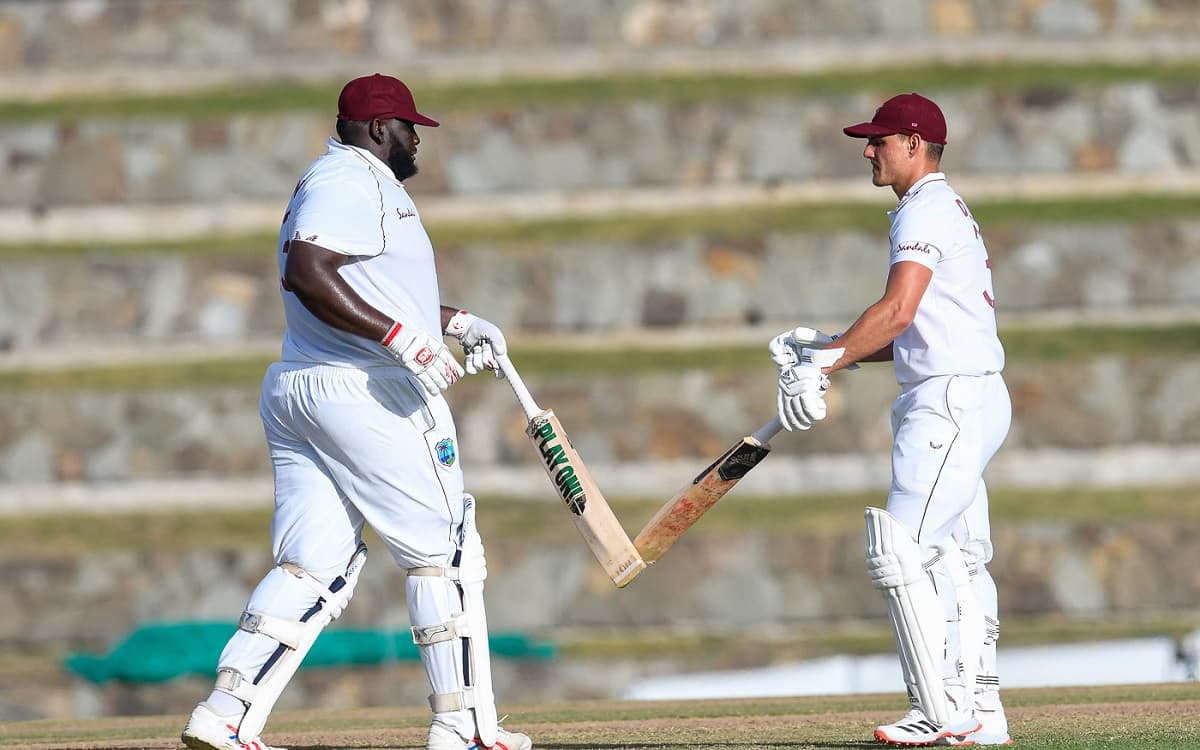 Cornwall's unbeaten half-century and a gritty 46 from Joshua Da Silva helped the West Indies reach stumps at 268/8 in reply to Sri Lanka’s first innings total of 169 all out. Cornwall will return to the crease on 60 on day three, with Kemar Roach on 4.

The 99-run first-innings lead looked less than likely when the pair came together at 171/7 following Lakmal’s five-for.

Da Silva was on 17 off 51 when he was joined by Cornwall but the latter ensured the pressure was put back on Sri Lanka’s bowlers while Da Silva kept things ticking over from the other end.

Having edged just short of the slips before he had scored a run, Cornwall opened his account with a pulled four off Lasith Embuldeniya (1/64). That set the tone for what was to come. His next runs came from a punched drive to the ropes at mid-off and in total 18 of his first 20 runs were in boundaries – the best of them a six off Vishwa Fernando (0/52) heaved over mid-wicket.

Fittingly, it was with a four off Embuldeniya that he brought up the first half-century of his Test career. It came off just 62 deliveries.

Happy to play the foil to the big-hitting Cornwall, Da Silva dealt mainly in ones and twos. He still brought plenty to the highlight reel, however, helping himself to five boundaries along the way, including a sumptuous cover drive off Dushmantha Chameera (2/71) and an off-drive against Lakmal that was every bit as good.

He eventually fell caught behind to Chameera for 46 but by that point, he had helped swing the match firmly in the West Indies’ favour.

Up until Cornwall and Da Silva’s 90-run stand, the day had belonged to Sri Lanka thanks to Lakmal, who had figures of 5/45 at stumps.

The West Indies started the day at 13/0 after bowling Sri Lanka out for 169 on day one. Lakmal struck the first blow for the tourists before another run had been scored, drawing an outside edge from West Indies captain Kraigg Brathwaite (3) that carried to the second slip. It was an early reward for a Sri Lankan team that started the day with back-to-back maidens.

The West Indies rebuilt from there, with John Campbell and Nkrumah Bonner putting on a 56-run stand to take a big chunk out of the deficit before Embuldeniya broke the partnership. The left-arm finger spinner trapped Bonner in front for 31 just before lunch.

Chameera had Campbell caught behind for 42 after the interval and Lakmal took over from there. Brought back into the attack for his first spell of the second session, the veteran seamer struck straight away, bowling Jermaine Blackwood (2) to leave the West Indies at 120/4.

He picked up his third by removing the dangerous Kyle Mayers (45), finding the left-hander’s edge with a delivery that seamed in sharply before flying into the hands of second slip.

Scores were level when he bowled Jason Holder for 19 and the West Indies only led by two when Lakmal wrapped up his five-wicket haul by having Alzarri Joseph (0) caught at backward point.