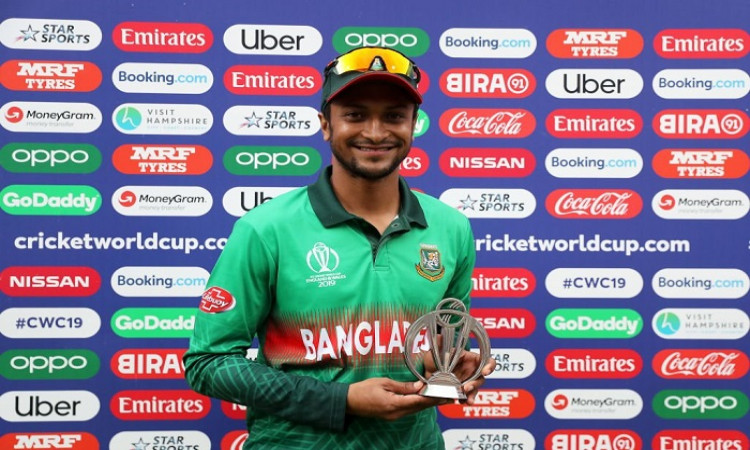 Southampton, June 25 (CRICKETNMORE):  Bangladesh's Shakib al Hasan, number one ODI all-rounder, has achieved a rare feat by becoming the only second player to score a 50 and take a five-wicket haul in a World Cup match.

On Monday, Shakib continued with his golden run in the ongoing tournament as he first scored 51 off 69 balls -- which included four boundaries -- to help Bangladesh post a competitive total of 262/7 against Afghanistan at the Rose Bowl Cricket Stadium in Southampton.

He then went on take five wickets for 29 in his 10 overs to help the Bangla Tigers register a 62-run win and bolster their chances of making it to the semi-finals.

During Monday's match, the left-hander also became the first Bangladeshi batsman to score 1,000 runs in World Cups. Shakib, who already has two hundreds to his name in the competition, also became the 19th player overall to achieve the feat.

So far, the 32-year-old has amassed 476 runs in six matches of the ongoing showpiece event and also has 10 wickets to his name. No other player has scored over 400 runs and taken 10 or more wickets in a World Cup.

Earlier, former Indian all-rounder Yuvraj Singh had achieved the feat in 2011 edition of the World Cup when he returned with figures of 5/31 and then went on to score an unbeaten 50 to help the Men in Blue register a comfortable five-wicket victory in their group stage game against Ireland.