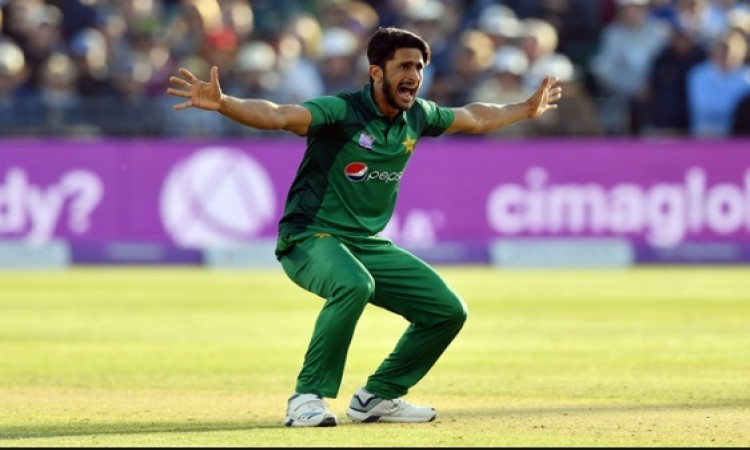 June 21 (CRICKETNMORE) After skipper Sarfaraz Ahmed, pacer Hasan Ali was the one who faced bulk of the criticism after Pakistan's embarrassing defeat to arch-rival India in their World Cup encounter on June 16.

In that match at the Old Trafford which Pakistan lost by 89 runs (D/L method), Hasan conceded 84 runs in just nine overs and was criticised by many, including former speedster Shoaib Akhtar.

After Team India's emphatic victory over their arch-rivals, Indian fans rejoiced the victory on social media and the Pakistani pacer ended up cheering for the Men in Blue.

A journalist had posted a tweet congratulating Virat Kohli's men and wishing for them to win the ongoing World Cup. "Congratulations #TeamIndia for the splendid win and giving us a moment to celebrate and to feel proud to be an Indian. #IndianCricketTeam let's capture the world cup now," the tweet said.

After this, the 33-year-old drew a lot of flak from the Pakistani fans because of which he later deleted the tweet.

Akhtar had earlier singled out Hasan for his forgettable performance against India and said that the right-arm pacer was only interested in playing T20s and the Pakistan Super League (PSL) while not putting enough effort when it matters.

"Hasan Ali, who never shies away from jumping around at the Wagah border, couldn't apply himself when it mattered the most. Many of his deliveries were short-pitched. "His mindset seems to be: I want to keep playing T20s and the PSL. But in the World Cup 2019, we can see that he has not shown any pace or swing that could trouble batsmen," said Akhtar.

With three points from five games, Pakistan are almost out of the contention of making it to the last-four stage. They will next face South Africa on Sunday at the Lord's.