June 27 (CRICKETNMORE) Pakistan skipper Sarfaraz Ahmed had to face a lot of backlash on social media after their defeat to arch-rivals India in the ongoing World Cup. After the defeat, the team went on to become the butt of all jokes with fans criticising the players' fitness and their training regime. 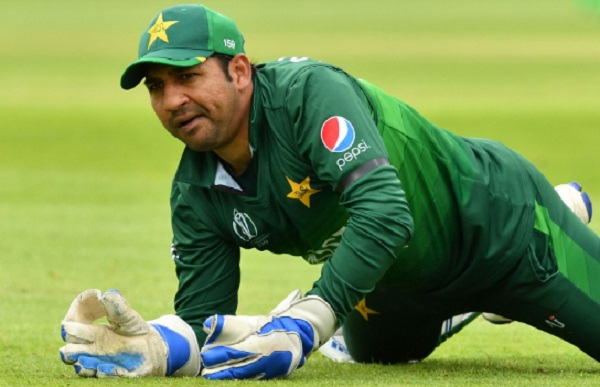 In fact, one Pakistani fan even called him a "fat pig" while he was taking a stroll in a London mall a few days ago.


'Pakistan are back in this World cup'- Imran Khan

However, on Wednesday, Sarfaraz took an outstanding catch during their match against New Zealand in Birmingham which Pakistan won by six wickets to remain in contention of the semi-finals.

During the ninth over of the match, Sarfaraz took the brilliant one-handed catch diving to his right to dismiss New Zealand's premier batsman Ross Taylor.

When Taylor got a thick edge of Shaheen Shah Afridi's full length delivery, Sarfaraz threw himself full-length to his right and got the hold of the ball with his right hand to give Afridi his second wicket.

As soon as the Pakistani skipper took the catch, the internet was once again flooded with memes, some praising his efforts while others taking a dig at his yawn during India's match.

One of the fans tweeted that Sarfaraz was able to take the catch because he slept well. "Sarfaraz ne catch nahi match pakra hai... Time pe soney ke faidey," said the user.

Another user tweeted the picture of Sarfaraz catching a burger instead of the ball. "Sarfaraz To Shoaib Akhtar: Ab bol na Unfit Sarfu you beauty. What a catch."

One of the users even used a still from Bollywood movie "Lagaan" and said that's how he felt after Sarfaraz took the catch.

The wicketkeeper-batsman had earlier said that he was deeply hurt by the harsh criticism he and his team had to face following their defeat to India. In an interview to the ICC, he even said his wife cried after he was called a "fat pig".

"I can't say anything on this. It's not in our hands to control what people say about us. Winning and losing is part of the game and it's not that we are the first team to have lost a match; previous teams also have faced defeats," Sarfaraz said.

"Had earlier teams faced the kind of criticism that we are facing, they would have realised how much these things hurt us. Now, there is social media. People write, comment and say whatever they like. These incidents affect the psychology of the players," he added.

The win against New Zealand had now put Pakistan on the sixth spot in the points table. While the team currently has seven points from as many matches, they need both luck and wins in their remaining two matches to ensure a path ahead in the knockout stages.