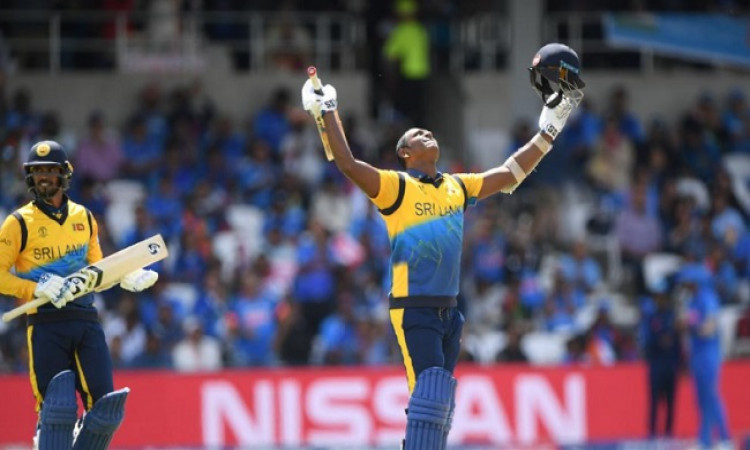 July 6 (CRICKETNMORE) Placed precariously at 55/4 in the 12th over against India at the Headingley Cricket Ground on Saturday, Sri Lanka finally saw their most experienced batsman rise to the challenge as Angelo Mathews hit a slow yet steady 113 off 128 balls (4x10, 6x2) to take the island nation to 264/7 in their 50 overs.

A 124-run partnership with Lahiru Thirimanne (53; 68 balls, 4x4) went a long way in bringing the Lankans back into their final World Cup game.

Opting to bat first, Sri Lanka got off to a terrible start as Jasprit Bumrah sent back Dimuth Karunaratne for just 10 in the fourth over, caught by Mahendra Singh Dhoni.

The out of form Kusal Perera flattered to deceive once again as he hit a 14-ball 18 before being packed back to the hut by Bumrah, once again caught by Dhoni. This after he was given a life as Kuldeep Yadav and Hardik Pandya had a bad mix-up looking to take the top-edge off his bat as Bhuvneshwar Kumar wore a sorry look walking back to his bowling mark.

Kusal Mendis was the next to go, reminding the fans of the typical dismissal before Kuldeep Yadav and Yuzvendra Chahal became India's leading spinners -- stumped Dhoni, bowled Ravindra Jadeja. The dismissal saw the Indian fans erupt with joy as Jadeja was playing his first game of the ongoing World Cup.

The otherwise in-form Avishka Fernando also flattered to deceive as Pandya had him caught by Dhoni for a 21-ball 20. With the score on 55/4 and Lanka in trouble, Thirimanne joined Mathews and the two ensured that they focused on stitching a partnership even if that meant the run-rate crawling at the pace of a snail. With almost half the batting back in the hut, they didn't really have an option.

The duo kept looking for singles even as a plan carrying the slogan "Justice for Kashmir" distracted all in the media box. The episode wasn't the first and last time that a private jet flew over the stadium with a political message as another plane followed a while later with the slogan "INDIA STOP GENOCIDE & FREE KASHMIR".

On June 29 during the match between Pakistan and Afghanistan, a plane with a banner reading "Justice for Balochistan" flew over the same stadium.

In the middle though, it was focus personified as both teams looked to gain the upper-hand. While India knew they needed one wicket to get the ball rolling again, the duo of Mathews and Thirimanne knew that batting deep was the key. Mathews was handed a life in the 37th over when Bhuvneshwar dropped him off Jadeja. He was batting on 61 then.

But the Indians finally struck in the 38th over as Kuldeep dismissed Thirimanne, caught by Jadeja, with the scoreboard reading 179/5. Mathews was finally dismissed in the 49th over by Bumrah as Lanka managed to score 64 runs in the last 10 overs. It was a respectable finish considering that the likes of Aravinda de Silva and the recently banned (by ICC) Sanath Jayasuriya were watching the game from the stands.