With this win, New Zealand are now 1-0 up in the 3-match ODI series against India.

NZ vs IND: Courtesy of a blazing knock by Tom Latham and a responsible inning by Kane Williamson, New Zealand defeated India by 7 wickets in the 1st ODI. With this win, New Zealand are now 1-0 up in the 3-match ODI series.

Chasing 307 runs to win, New Zealand lost Finn Allen (22) in the 8th over to Shardul Thakur for 35 runs. His partner, Devon Conway (24) was dismissed in the 16th over as Umran Malik grabbed his first ODI wicket on debut.

Daryl Mitchell (11) was dismissed in the 20th, with the scoreboard reading 88/3. After which, Kane Williamson and Tom Latham got together to power the Kiwis to a successful run chase. The two kiwi batters etched a partnership of 221* runs in just 165 balls for the 4th wicket, which is the highest-ever 4th-wicket partnership for New Zealand in ODIs. Tom Latham reached his fifty off 51 balls, and then raced to his ton in just 24 more deliveries. Amidst this, Latham scored 25 runs off a single over against Shardul Thakur in the 40th over. 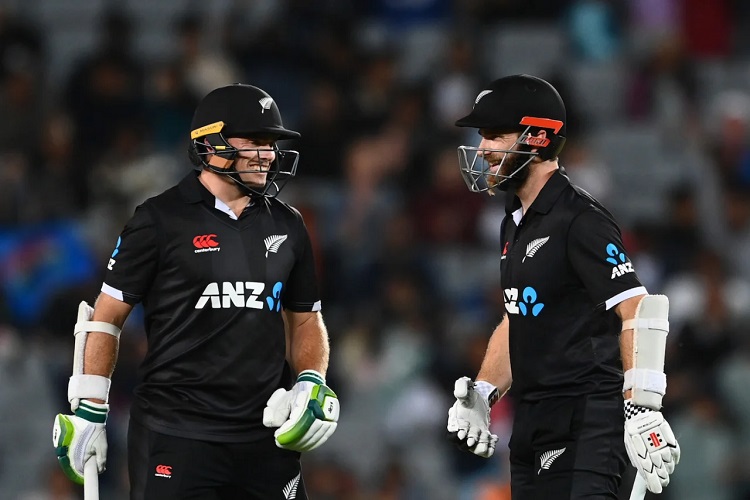 For India, debutant Umran Malik grabbed 2 wickets while Shardul Thakur managed 1 wicket. Arshdeep Singh had a forgettable debut as he conceded 64 runs in his 8 overs without picking up a wicket. This was only the 2nd time when a 300+ target has been successfully chased down at Eden Park, Auckland.

What A Run Chase, What A Win For New Zealand!

In the first innings, After being put in to bat first, Indian batters showed up with an impressive performance as India posted 306/7 against New Zealand in the 1st ODI. Shreyas Iyer, Shikhar Dhawan and Shubman Gill smacked fifties while Washington Sundar played the finisher to power India to a good total.

Shreyas Iyer came out to bat at #3 and was joined by Rishabh Pant in the middle. Pant continued his below-par run and was dismissed after scoring just 15 runs in 23 balls. Suryakumar Yadav couldn't continue his golden run from T20Is and was dismissed for just 4 runs.

Sanju Samson, who finally got a place in the playing XI, came out to bat at #6 and did well for his 36 runs off 38 balls before an excellent catch by Glenn Phillips ended the innings. Shreyas continued on the other end as he smacked 80 runs off 76 balls, and was dismissed in the last over.

Washington Sundar, batting at #7, smashed 37 runs off just 16 balls with 3 fours and 3 sixes. For New Zealand, Tim Southee and Lockie Ferguson grabbed three wickets each while Adam Milne managed 1 wicket. However, Southee was rather expensive as he gave away 73 runs in his 10 overs.

Earlier, New Zealand captain Kane Williamson won the toss & opted to bowl first against India in the 1st ODI. This match is being played at Eden Park, Auckland.