SunRisers Hyderabad (SRH) on Tuesday recorded their first win of the IPL season as they beat Delhi Capitals by 15 runs at the Sheikh Zayed Stadium here. 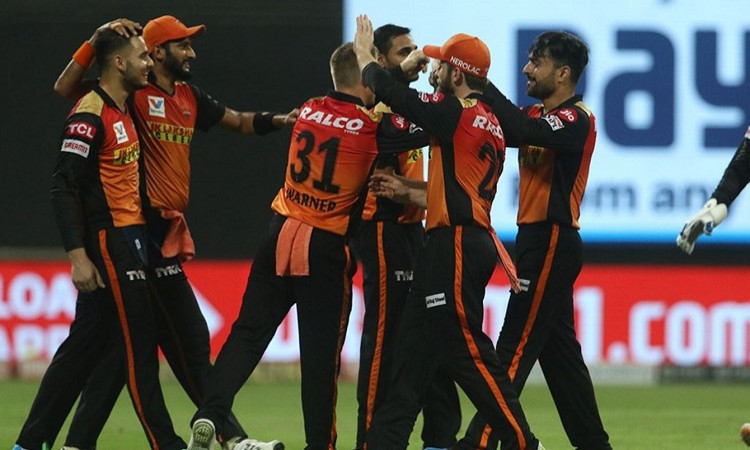 Fast bowler Bhuvneshwar Kumar struck early for SRH, dismissing DC opener Prithvi Shaw (2) in the first over of the innings. DC captain Shreyas Iyer joined Shikhar Dhawan in the middle and while the pair ensured that the team didn't lose any more wickets in the powerplay, they could not take the attack to the opposition. Shreyas Iyer eventually fell on 17 off 21 balls to become Rashid's first wicket.

Rishabh Pant struggled to get the run rate up, taking 27 balls to get to his 32. Shimron Hetmyer (21) also struggled to get going before hitting a couple of sixes off Khaleel Ahmed in the 15th over. He tried to keep up the pace and ended up falling to Bhuvneshwar off the very first ball of the next over. Pant eventually fell to Rashid and in the next over, Marcus Stoinis was out LBW to T Natarajan.

Khaleel bowled the last over with 27 to defend and he rarely gave the batsmen a chance to get going. He dismissed Axar Patel off the third ball and Kagiso Rabada ended the match with a six.

Earlier, Kane Williamson, playing his first match of the season, helped SRH to 162/4 with a quickfire 41 off 26 balls. Jonny Bairstow played the role of anchor, scoring 53 off 48 while his opening partner and SRH captain David Warner made 45 off 33.