Delhi Capitals (DC) held their nerves to register a thrilling five-wicket win over Chennai Super Kings (CSK) on Saturday, thanks to opener Shikhar Dhawan's unbeaten 101, his maiden IPL ton, and Axar Patel's (21 not out) last over blitz. Dhawan's blistering ton, which came off 58 deliveries, contained 14 boundaries and a six. 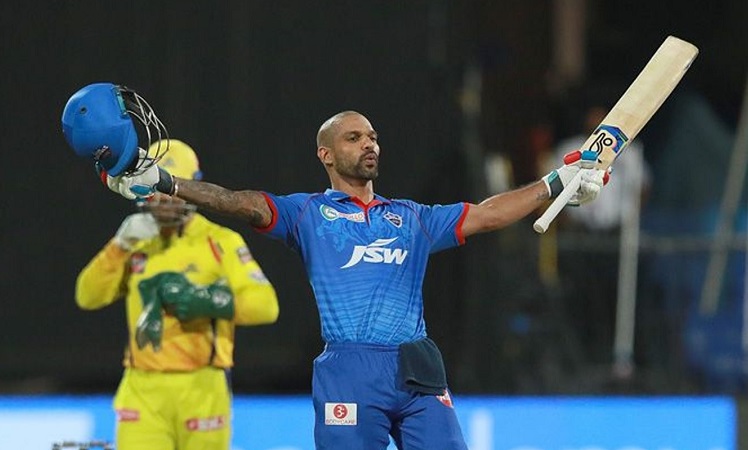 The win helped DC reclaim the top spot in the IPL points table while CSK remained static at sixth.

Chasing a target of 180, DC received an early jolt when Deepak Chahar sent back Prithvi Shaw for a duck off the second ball of the innings.

Chahar struck again in the fifth over, this time accounting for the wicket of Ajinkya Rahane (8) which left DC at 26/2 in 4.1 overs. Dhawan and DC captain Shreyas Iyer (23) then forged a 68-run partnership for the third wicket. Just when DC were on the verge of touching the three-digit mark, Dwayne Bravo came up with a breakthrough when he dismissed Shreyas in the 12th over.

Marcus Stoinis (24) then joined Dhawan in the middle and the duo put up 43 runs off 25 balls. The Australian fell in the 16th over to Shardul Thakur.

Dhawan kept the scorers busy while Alex Carey (4) fell to Sam Curran off the first ball of the penultimate over. DC were still 21 runs away from victory at the time of the dismissal.

Dhawan crossed over into the three figures but did not care to celebrate as the equation came down to DC needing 17 to win off the last over. CSK captain MS Dhoni later admitted that he was forced to turn to Ravindra Jadeja in the last over due to an injury to Bravo, the bowler he depends on to provide the goods in the death overs. The move did not work as Axar (21 not out) smashed the CSK spinner for three sixes to seal a victory for his side with one ball to spare.

Chahar returned figures of 2/18 while Sam Curran, Bravo and Shardul Thakur picked up a wicket each for CSK.

CSK, who opted to bat, lost opener Sam Curran for a duck off the third ball of the match. Shane Watson (36) and du Plessis (58) repaired the damage as they added 87 runs for the second wicket.

After the duo departed, Dhoni faltered once again as he was sent back by Anrich Nortje in the 17th over after scoring just three runs.

Jadeja and Rayudu escalated the run-rate towards the death as the pair added 50 runs off just 21 balls to steer CSK to 179/4. Jadeja's unbeaten cameo off just 13 balls and was laced with four sixes.