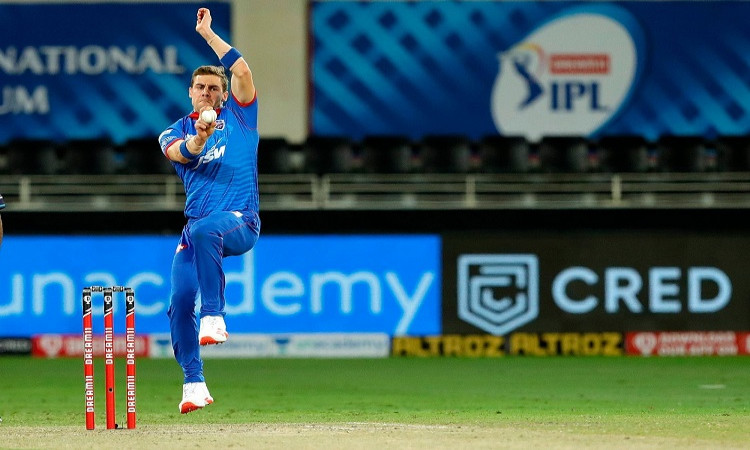 The South African bowled DC's third over, which was also his first of the day, and started off with a delivery that clocked 148.2 kmph. It was hit by Jos Buttler for a six. He then bowled two deliveries that were timed 152.3 kmph and 152.1 kmph, after which came his slowest ball of the over at 146.4 kmph.

Also Read: Its A Start Of A Second Innings For Us, Have A Strong Belief We Will Turn Things Around: Kumble

Nortje, 26, then sent the fifth ball at a scarcely believable 156.2 kmph that shattered the record for the fastest ball of all time in the IPL, held by his illustrious compatriot Steyn. The veteran fast bowler had set the record while playing for Deccan Chargers in 2012. Buttler, however, ramped the delivery fine for a four.

Playing in his first IPL season, Nortje then bowled a 155.4 kmph delivery, which pushed Steyn's 2012 ball to third on the list of all-time fastest balls in the tournament history. Buttler went for a more orthodox shot down the ground and the ball ended up flashing past him and hit the middle stump.

The opening overs of the RR innings, who were chasing a target of 162, featured an engrossing contest in which openers Ben Stokes and Buttler got their team off to a quick start. Buttler had scored 22 of nine balls while Stokes made 15 off as many when Nortje provided DC the breakthrough.

Nortje then pushed Steyn down to fourth by starting the fifth over with a full delivery that clocked 154.74 kmph.

South African Kagiso Rabada, who was in the XI along with Nortje on Wednesday, had come closest to breaking Steyn's record in the 2019 season when he sent in a delivery that clocked 154.23 kmph.