Kolkata, Nov 14 (Cricketnmore) India vice captain Ajinkya Rahane on Tuesday said they are not taking Sri Lanka lightly despite recently humbling the tourists 9-0 across all formats in their own den. 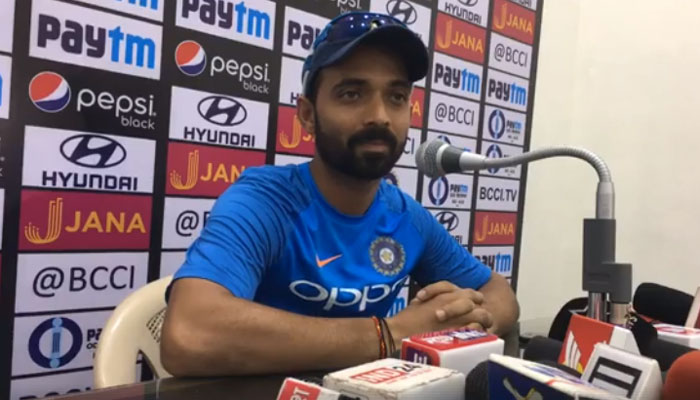 "This series is completely different compared to how we played in Sri Lanka. We know the conditions here but we are not taking Sri Lanka lightly. We had a good series in Sri Lanka," Rahane told reporters here two days ahead of the first Test.

"For us every match and series is important before going to South Africa (in January) but I feel we are just focussing on this series right now, first game in Calcutta. We just want to think about our game rather than thinking about their combination or their strengths."

"I always think that if I improve one shot in the net session I will be better off in the game. If opportunity comes in the game, I am 100 percent confident of playing a particular shot. So I am just practising reverse sweeps, sweeps and paddle sweeps just as an option."

Is he comfortable playing the reverse sweep? "I am comfortable. For me it's important to give my best in the nets. Do that I think 5-6 maybe more than that. If I am comfortable in the game, maybe I will play that shot," Rahane said.

India will play a Test after a gap of three months. Virat Kohli and co have since then been playing white-ball cricket against Australia and more recently New Zealand. Rahane, though, said shifting formats won't be an issue.

"The team shape is good. We all know how to adjust in different formats. We are all professionals so there won't be any problem," the 29-year-old said.

"Yesterday we had a good practice session so it won't be difficult to adjust. First Test is important to get the momentum. I am sure preparation will be good before the first Test."