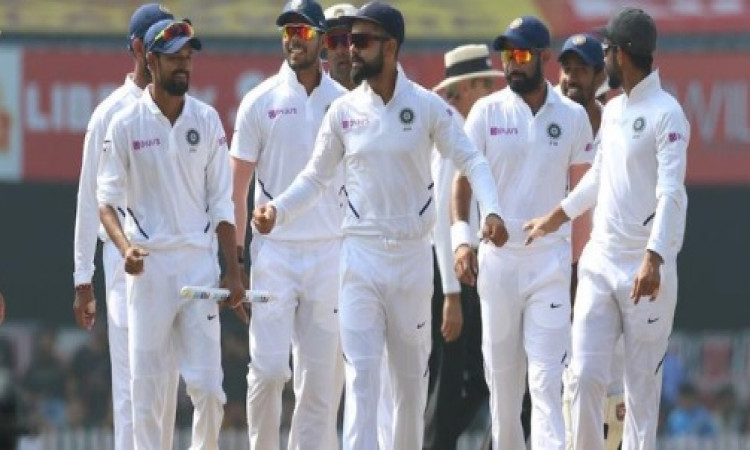 Ranchi, Oct 22  India registered an emphatic victory over South Africa by an innings and 202 runs in the third and final Test at the JSCA Stadium on Tuesday to clinch their first-ever series whitewash over the Proteas.

Needing just two wickets to maintain their supremacy on Day 4, the Indian team completed the formalities within the first 12 balls giving away just one run and concluded what has been a highly dominant show by the No.1 ranked team over South Africa.

Overnight batsman Theunis de Bruyn -- who came in as concussion substitute for Dean Elgar -- was the first to go as he became Shahbaz Nadeem's first victim in the second innings. He was caught brilliantly by wicketkeeper Wriddhiman Saha at his individual score of 30.

The very next ball, Nadeem took a rebound catch to dismiss Lungi Ngidi. Ngidi seeing the tossed up delivery went for a hoick straight down the ground and it was struck so hard that Anrich Nortje at the non-striker's end had no time to react and the ball popped up. Nadeem was alert to the possibility of a rebound and took an easy catch to bring an end to the South Africa second innings at 132.

Mohammed Shami and Umesh Yadav picked up five wickets apiece during the course of the Test match and spinners Ravindra Jadeja, Ravichandran Ashwin and debutant Nadeem also contributed to India's success by scalping 3, 1 and 4 wickets respectively.

Earlier, South Africa were bundled out for mere 162 in their first innings in response to India's 497/9 declared and skipper Virat Kohli enforced the follow-on for the eighth time in his career. Rohit Sharma had scored his maiden double hundred and was well supported by India vice-captain Ajinkya Rahane who scored his first ton in India in three years.

The performance of the visitors in the second essay was no different as they kept on losing wickets right from the start and showed no application whatsoever. The Proteas batsmen appeared clueless against the class of the Indian bowlers, especially Umesh Yadav and Mohammed Shami.

South Africa had already lost the Test series by tasting comprehensive defeats in the first two Tests. In Visakhapatnam, India won by 203 runs and went to register an emphatic innings and 137 runs in Pune.

India now have 240 points in the ongoing World Test Championships after winning all the five matches they have played so far since the inception of WTC and are currently placed at the top spot. They are now scheduled to play Bangladesh in the two-Test series beginning November 14.