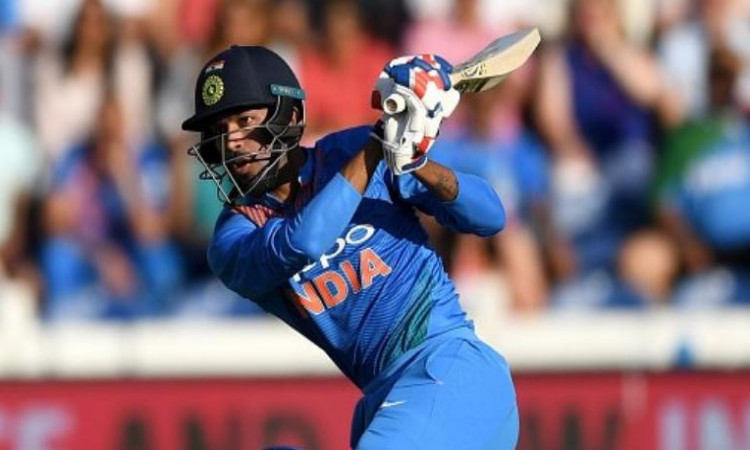 Nov 3 (CRICKETNMORE) Bangladesh came out with a good bowling performance as they restricted India to 148/6 in the first T20I of the three-match series at the Arun Jaitley Stadium here on Sunday.

Opener Shikhar Dhawan was the top-scorer for India as he played a gritty knock of 41 against a Bangladeshi side that mostly relied on their spinners to keep the hosts in check.

Put in to bat, India didn't have a great start as they lost stand-in skipper Rohit Sharma in the very first over. Rohit, who smashed two boundaries during his five-ball stay, was trapped in front of the stumps by Shafiul Islam.

K.L. Rahul then joined Dhawan in the middle and the duo ensured that the hosts didn't lose any more wicket in the Powerplay. Both adopted a cautious approach and played the balls on their merit, hitting boundaries whenever they got the opportunity. They took India's score to 35/1 at the end of six overs.

However, just after the conclusion of the Powerplay, Rahul (15 off 17) lost his wicket to leg-spinner Aminul Islam who has him caught at cover by skipper Mahmudullah.

Shreyas Iyer came out all guns blazing and batted with great intent, as India reached the 50-run mark in 7.2 overs. Iyer, who has been in great nick since the West Indies tour, batted aggressively and took the hosts to 69/2 by the end of 10 overs.

However, in trying to hit his third maximum, the 24-year-old lost his wicket after scoring 22 off 13 balls, becoming the second scalp of Aminul Islam.

Dhawan, who was holding the Indian innings together from one end, also gave away his wicket just when he was looking to up the ante. After scoring 41 off 42 balls, the left-handed opener got run out following a miscommunication with Rishabh Pant.

India reached the 100-run mark in 15.4 overs. Left-handed all-rounder Shivam Dube, who was making his international debut, failed to impress on his first outing as he could score just one run before he was caught brilliantly by Afif Hossain off his own bowling.

Pant then stitched an 18-run partnership with Krunal Pandya and threatened to take the game away from the visitors. But, just before he looked all set to unleash some big shots, he got out after contributing 27 runs to India's tally.

However, Pandya (15 off 8) and Washington Sundar (14 off 5) provided India the much-needed impetus at the end as they collected 16 runs in the final over to help their team reach near the 150-run mark.

Islam was the pick of the Bangladesh bowlers as he gave away 22 runs in his three overs and picked up two wickets.