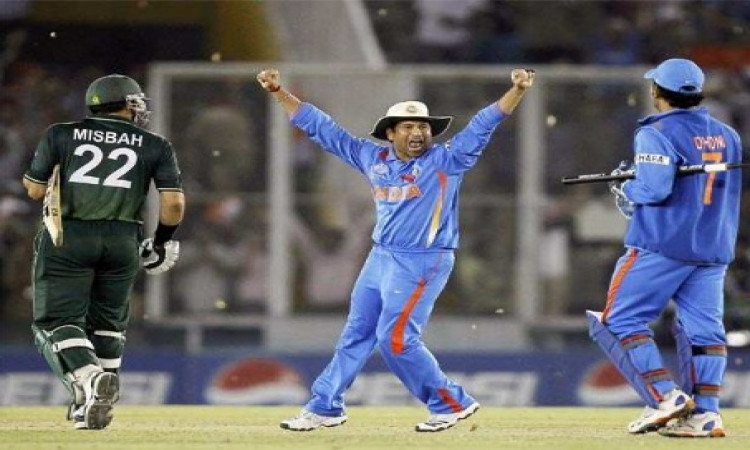 June 15 (CRICKETNMORE) Cricket is a religion both in India and Pakistan and a clash between the two arch-rivals in the field is no less than a war. Despite closure of bilateral ties, the two teams face-off in multi-nation events and so far, the Men in Blue have won all the six games they have played in World Cups.

Sydney, 1992
Pakistan may have won the 1992 edition of the showpiece event, but prior to that, the Green Brigade suffered a 43-run loss against India. Winning the toss, India opted to bat first and Sachin Tendulkar's unbeaten 54 runs helped them put 216/7 on the board. In return, Amir Sohail's valuable 62 went in vain as the Pakistan team was bundled out for 173. Kapil Dev, Manoj Prabhakar and Javagal Srinath picked two wickets apiece for India.

Bengaluru, 1996
In this edition, the two sides squared-off in the quarter-finals in Bengaluru. Once again, India opted to bat after winning the toss and opener Navjot Singh Sidhu's 93 guided them to 287 runs. Not to forget Ajay Jadeja's quick finish at the end. Chasing the target, Pakistan started decently, but Anil Kumble and Venkatesh Prasad picked three wickets each and dismissed the neighbours for 248 as India won by 39 runs.

Manchester, 1999
It was a dismal show from India in this edition of the showpiece event. But the Men in Blue once again kept the winning momentum against their arch-rivals going as they hammered Pakistan by 47 runs. Electing to bat, India put on 227/6, courtesy Rahul Dravid's 61. In reply, Pakistan were dismissed for 180 runs, thanks to Venkatesh Prasad's five-wicket haul.

Centurion, 2003
This time, the Men in Blue under the leadership of Sourav Ganguly entered the finals before losing to Australia. However, they kept the winning record against Pakistan intact as Ganguly's young guns once again thrashed Pakistan by six wickets. Opener Saeed Anwar's valiant 101 runs guided Pakistan to a decent 273/7 in the allotted 50 overs. But again, India registered a thumping win as they overhauled the target in 45.4, thanks to Sachin Tendulkar's scintillating knock of 98.

Adelaide, 2015
This time, India registered a massive 75-run win over Pakistan. It was Virat Kohli's fine 107 which guided the MS Dhoni-led team to 300/7 before the Men in Blue wrapped up Pakistan for just 224. For India. Mohammed Shami scalped four wickets.

In the current edition, India are placed third with five points after two wins while the third game was washed out against New Zealand. On the other hand, Pakistan have played four games, winning one, losing two and the fourth being washed out. The Sarfaraz Ahmed-led side is placed eighth with just three points in their kitty.