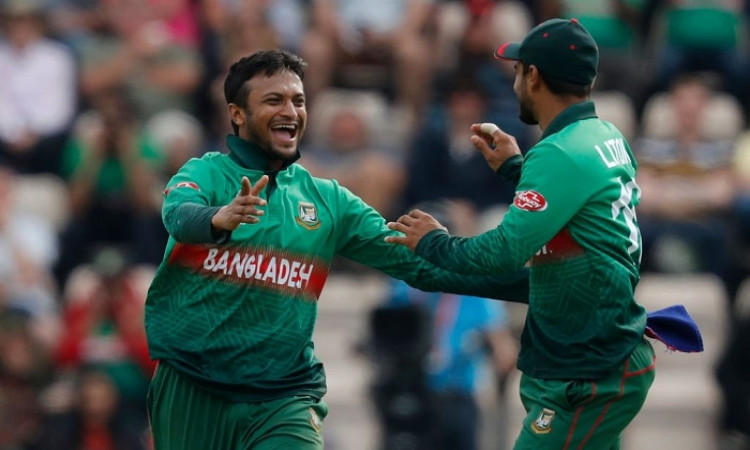 Southampton, June 25 (CRICKETNMORE):  All-rounder Shakib al Hasan believes Bangladesh are capable enough to beat India, adding they will have to play their best in order to beat the Men in Blue in the next cricket World Cup fixture on July 2.

On Monday, Bangladesh defeated Afghanistan by 62 runs and kept their chances alive of making it to the semi-finals.

Riding on Shakib's 51, the Bangla Tigers first posted a competitive total of 262/7 and then bowled out Afghanistan for 200 in 47 overs. The all-rounder picked up five wickets for 29 runs and was adjudged the Player of the Match.

Against Afghanistan, Shakib also became the first Bangladeshi batsman to score 1,000 runs in World Cups. He also became the second player after Yuvraj Singh to score a 50 and take five wickets in a single World Cup game.

Bangladesh now have seven points from seven games and need to win their remaining two matches against India and Pakistan to remain in contention for ending in the top four. Besides the two wins, Bangladesh will also need results of matches of other teams as well to go in their favour to make it to the last four stage.

"They (India) are the top side. They are someone who is looking at the title. So it's not going to be easy, but having said that, we'll give our best shot," Shakib said at the post-match presser at the Rose Bowl Cricket Stadium.

In the 2007 edition of the World Cup, Bangladesh had knocked out India at the group stage and Shakib thinks his team is more than capable of doing it again.

"Experience will help, but experience is not the end of the world. We have to play our best cricket in order to be able to beat India.

"They got world-class players who can take the matters on their own hand. As I said, we have to be at our best, and I believe that we are a capable enough team," he added.

The 32-year-old is currently the leading run scorer of the tournament. He has scored 476 runs and also 10 wickets to his name. And Shakib is happy with his performance so far.

"It is very satisfying. It was needed. It was important from my perspective and from (the) team," he said. "Luckily, I've been doing this, and very happy the way this tournament is going so far," he added.

Bangladesh now have a week's break before their next game against India at Edgbaston which will be followed by their last league game against Pakistan on July 5 at Lord's.