Ind V Pak: I Have No Voice Left, Kohli's Unbeaten 82 Is The Best Innings Played For India, Says Rohit

Kohli and Pandya (40) shared a match-winning stand of 113 off 77 balls for the fifth wicket, lifting India from deep trouble at 31/4 in 6.1 overs against Pakistan. 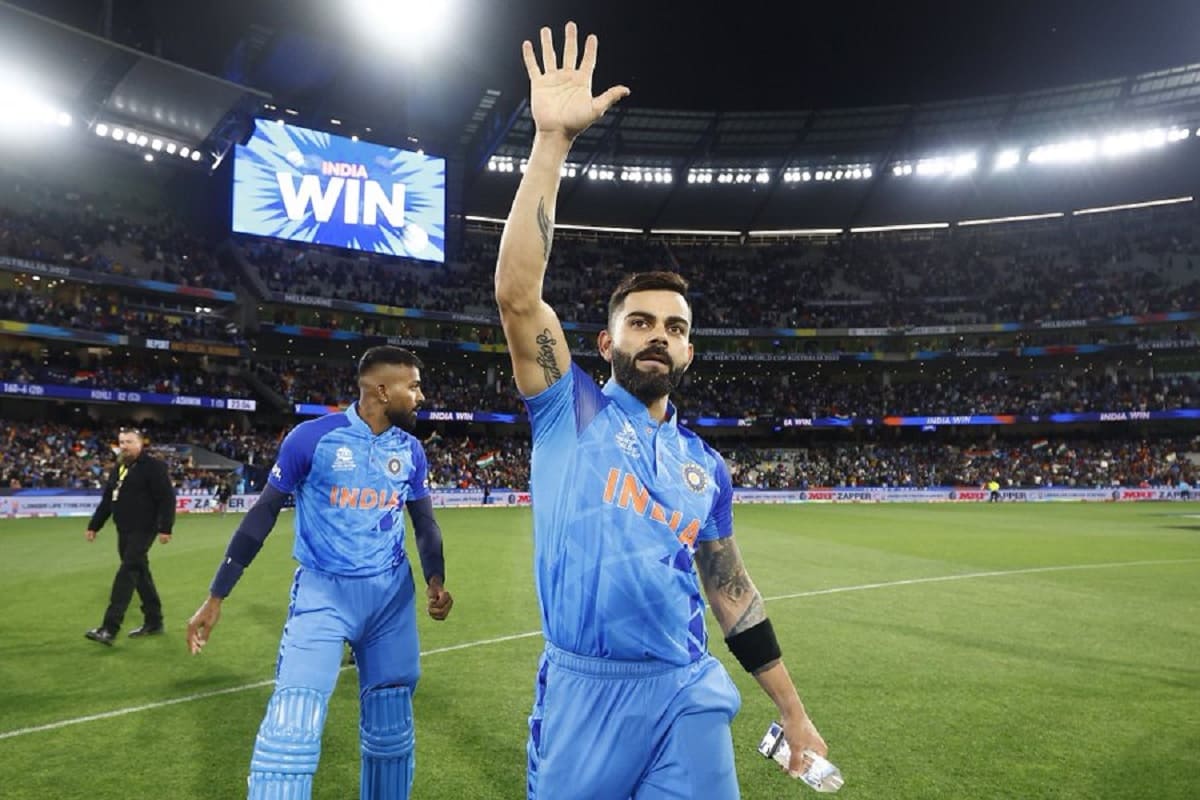 Though India captain Rohit Sharma admitted that he had no voice left in him after India pulled off a heart-stopping chase of 160 to get a four-wicket win over Pakistan in their first Super 12 match of Men's T20 World Cup at a sell-out Melbourne Cricket Ground, he admitted that Virat Kohli's astonishing 82 not out was one of his best knocks ever played for India.

Kohli and Hardik Pandya (40) shared a match-winning stand of 113 off 77 deliveries for the fifth wicket, lifting India from deep trouble at 31/4 in 6.1 overs to chasing 160 on the last ball to get their campaign in the ongoing tournament off to a winning start in front of 90,293 fans at the iconic stadium on Sunday.


IND V PAK: Dead Ball Controversy Explained: Why Was Kohli Given Three Byes After Being Bowled On A Free Hit Vs Pakistan?

"I have no voice left. We were always wanting to make sure we stayed in the game as long as possible. We've been talking constantly about it. No matter what the situation, you've got to believe you can pull through, and that partnership changed the game for us."

"Hats off to Virat. It has to go off as not one of his best, but the best innings he has played for India. Thanks to everyone who came out and supported us, and I will expect nothing less wherever we travel in Australia," said Rohit in the post-match presentation ceremony.

Kohli and Pandya took some time before the latter drilled a straight drive off Shadab and smacked two sixes over long-on and deep mid-wicket off Nawaz, sandwiched between Kohli launching a glorious six over long-on to make it 20 runs off the 12th over.

Apart from collecting plenty of twos with Pandya, Kohli brought out his deft touch with a fine glance off Shaheen, cutting off his wrists past deep cover off Shadab and flicked past diving short fine leg off Shah to collect three quick fours, thus paving the path for him to be smiling with his arms aloft and dishing out a chasing masterclass in front of a packed MCG.

"Virat and Hardik are experienced guys. Staying calm and taking it as deep as possible was critical, and they did that. It's good for our confidence to get off the mark in our first game, and the way we won is more pleasing for us, the way we came back," added Rohit.

Rohit signed off by appreciating his bowlers for keeping Pakistan to 159/8 and appreciated Pakistan for batting well in the middle, thanks to a 76-run stand between Shan Masood (52 not out) and Iftikhar Ahmed (51).

"There was good carry, good swing as well, and we utilised that well up front. That was good to see from the bowling perspective. They batted well in the middle. We knew it would not be an easy target on that pitch. We knew we would have to bat out of our skins."

Pakistan skipper Babar Azam was appreciative of Kohli's chasing masterclass in giving India a crucial victory. "A tight game. We started well in our bowling, and then all credit to Hardik Pandya and Virat Kohli. They shifted the momentum and finished the game well."

"It's not easy with the new ball, with a little bit of swing and seam. We had a chance, and we just asked the boys to believe in themselves, but again credit to Virat Kohli."

Asked on why he kept Mohammad Nawaz's final over for the last over of the innings, Azam remarked, "We needed a wicket, that's why we utilized our main bowlers (and kept Nawaz for the end). A lot of positives. The way Iftikhar played, the way Shan played and finished the innings was good for us."