June 21 (CRICKETNMORE) Australian opener David Warner has been in great form in the ongoing World Cup. So far he has amassed 447 runs at an average of 89.40 in six matches, which include two hundreds as well. 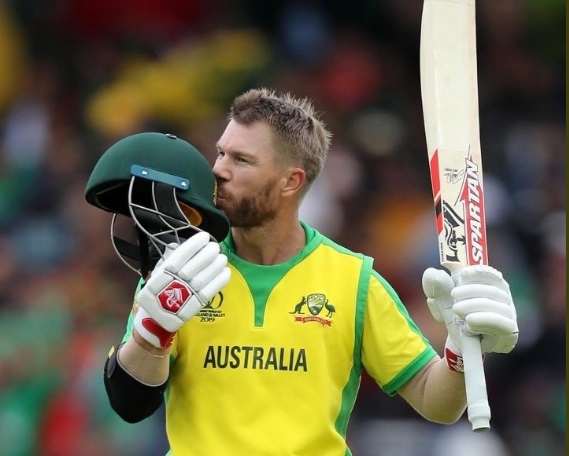 On Thursday, it was his daddy hundred which powered Australia to 381/5, before Bangladesh responded with 333/8 in the highest scoring World Cup match of all time. Warner scored 166 off 147 balls, which consisted of 14 fours and 5 sixes.

After the match, Warner revealed that his teammates have given him a new nickname.

"The guys call me 'Hum-Bull' (humble)," Warner was quoted as saying by cricket.com.au at his post-match press conference. "Look, it's just one of those things. I think I was on a good behaviour bond for two years, I think it was, if that's what you want to call it, with the ICC. And couldn't really do anything on the field and I'm at that point (in life) as well at the moment."

The 32-year-old was known as "Bull" early in his career before he was nicknamed as "Reverend".

"It's a different game. We've played so much cricket over the last 12 months with a lot of different people, especially the Bangladesh guys. Getting to know a lot of them as well has been great. It just opens your eyes to a new world. It's just normal me now," said Warner.

With 16 ODI hundreds, Warner has now drawn level with Adam Gilchrist for third spot for the Australian with most number of ODI centuries.

In an on-field interview, the swash-buckling left-handed opener said he was "trying to make up" for the year he lost due to the ball-tampering scandal. Warner, along with Steve Smith, was handed a 12-month ban by Cricket Australia for their involvement in the Sandpaper Gate controversy.

"It's just more runs that you can miss out on," Warner explained later. "For me it's about going out there and putting my best foot forward for the team and trying to score as many runs as I can, to make up for all the runs that I've missed out on and for the team."

Although this was Warner's second century in the tournament, he had to deal with a lot of criticism for his slow starts in the earlier matches of the tournament.

Even against Bangladesh, he started off slowly. Warned scored his first 25 runs in 32 balls, then reached a 50 off 55 and a hundred off 110 balls. However, after reaching the hundred, he switched gears to score his final 66 runs off just 37 deliveries.

"I don't mean to go out there and bat slow," Warner said. "I've tried to get a calculation how many fielders I've hit in the first 10 (overs).

"I got frustrated against India. I got frustrated against Afghanistan. And then today, Finchy (Aaron Finch) kept telling me to hang in there and bat deep and bat time. And that was in like the eighth or ninth over. Because it's generally not my game to stick there, and I usually try and go after it a little bit. Must be a bit more maturity, I think," he added.

Australia, with 10 points from six games, are all but sure of a place in the semifinals. Their next game is against England on June 25 at the iconic Lord's.