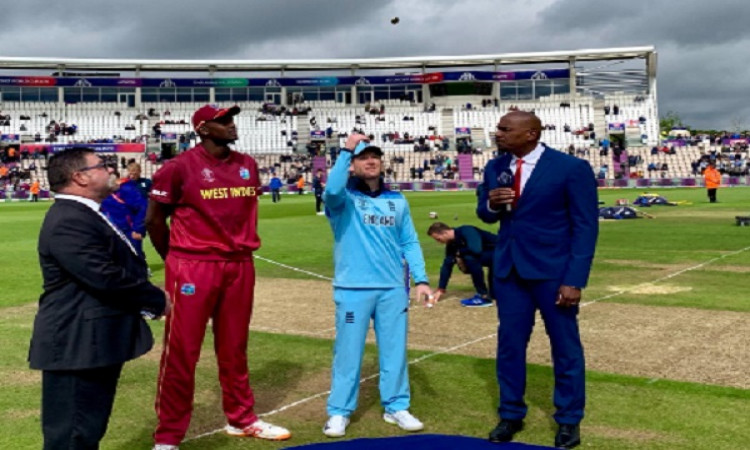 June 14 (CRICKETNMORE) England skipper Eoin Morgan won the toss and elected to field against the West Indies in their fourth World Cup fixture at The Rose Bowl on Friday.

England have gone with the same team that played against Bangladesh in their last encounter.

On the other hand, West Indies have made three changes in their playing XI that featured against South Africa. They have brought in Andre Russell, Evin Lewis and Shannon Gabriel.

After the toss, Eoin Morgan said: We are gonna have a bowl first. The wicket has been under covers for last 24 hours. There has been a lot of rain around and we feel there would be some moisture on it. It's a completely different challenge that we had against Bangladesh. The World Cup is about adapting to conditions. Tough challenge for us. We have got the same team.

Jason Holder said: We would have wanted to bowl first as well thanks to a fresh wicket. We guys have planned well for this game and we are up for it. It is a matter of adapting to situations. We have got three changes. Evin Lewis comes in, Russell comes back and Shannon Gabriel is playing his first game.

Ian Bishop during the pitch report said: It has been under the covers all day yesterday but still feels hard. But the hooded covers have helped and no amount of water has seeped in. The grass has been cut at a level lesser than other tracks previously. The hardness will help someone like (Jofra) Archer. The West Indies have also got a lot more deliveries up at the shoulder and the head. Even Windies won't mind it as their plan has been to get it up at the heads of the batsman and bounce them out.