Dream delivery got Babar out: Kuldeep 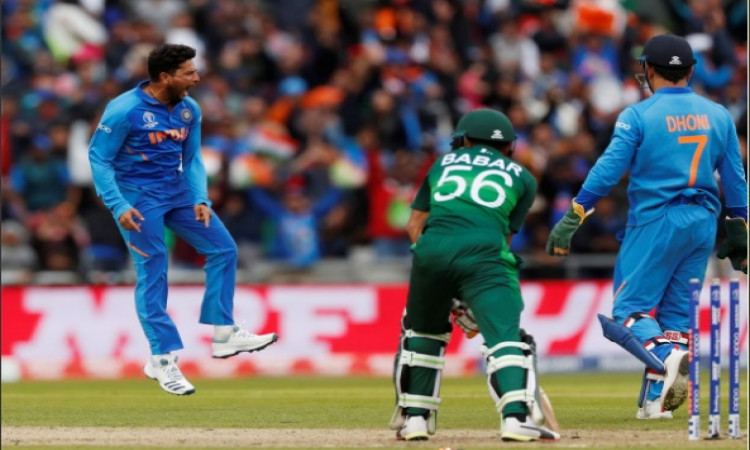 June 17 (CRICKETNMORE) Left-arm chinaman Kuldeep Yadav admits that the delivery he bowled to get rid off Pakistan batter Babar Azam during their World Cup fixture was a "dream" one.

The left-arm bowler returned with figures of 2-32 from his nine overs and played a prominent role in India's thrashing of Pakistan by 89 runs (DLS method) in a match that was marred by rain at the Old Trafford on Sunday.

It required a magical delivery to deceive Babar and Kuldeep bowled one to leave Pakistan's most technically-correct batsman stunned.

Bowled at 78kmph, the ball which pitched well outside off stump, nipped back sharply with the drift taking it away to hit the middle-leg stump and ended the 48-run inning of Babar.

"Getting Babar Azam out was the best delivery for me in this tournament. I got him out in the Asia Cup as well," Yadav told reporters after the match. "After the rain break, I went back and watched that delivery. It had drift and turn, so any spinner will love that delivery.

"It's a proper dream delivery and a proper Test delivery. Deceiving the batsman in the air and making him commit the mistake. A perfect delivery," he added.

There were questioned raised over Kuldeep's selection in the playing XI by many considering his form in the 2019 edition of the Indian Premier League (IPL) where he failed to perform and was even sidelined for some of the matches by the Kolkata Knight Riders (KKR).

However, in the ongoing World Cup, the left-arm chinaman seems to have found the rhythm. Against South Africa, he returned with figures of 1/46 while against Australia, he went wicketless conceeding 55 runs from his 10 overs.

Meanwhile, skipper Virat Kohli also praised the bowler and said, "Kuldeep Yadav was brilliant. Those guys were only trying to play him out. A longer spell helped in that situation and he was getting into rhythm. They were thinking that he would go out of the attack sooner rather than later."

"That ball to dismiss Babar was just outstanding with the drift, the turn and just beating the batsman batting so well. This is the best he has been bowling since coming to England and, -- him confident with Chahal -- is going to be an important factor for us in the tournament," he added.