Indore, Sep 23 (Cricketnmore): After overpowering Australia in the opening two games, a dominant India will aim to pocket the five-match One Day International (ODI) series when they face the Kangaroos in the third game at the Holkar Stadium here on Sunday. 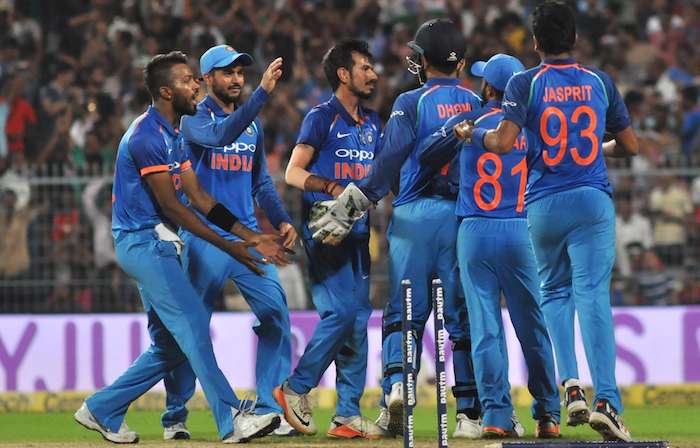 On a 10-match overseas losing streak, the Steve Smith-led side will have their task cut out and face a must-win situation to have a chance at the trophy.

On the other hand, India are currently on an eight-match winning run, and hold an upper hand at Indore, where the men-in-blue have a 100 percent winning record (won all four of their matches so far).

Surprisingly the credit of No.1-ranked India's success in the ongoing series goes more to the bowlers, who have managed to defend scores of 164 (revised target in 21 overs) and 252 in the first two matches.

India's new-found spin-twins Kuldeep Yadav and Yuzvendra Chahal have racked up 10 wickets together in the series so far and will once again be skipper Virat Kohli's go-to men in the middle overs.

Australia have found it hard to solve the mystery around chinaman Kuldeep, who on Thursday became the first Indian spinner to score a hat-trick in 50 overs cricket.

Not only the spinners, the pace duo of Bhuvneshwar Kumar and Jasprit Bumrah have also been impressive at both the start and the death overs. Coming in as first change, India have got the perfect all-round option in Pandya, who also has done his part with the ball.