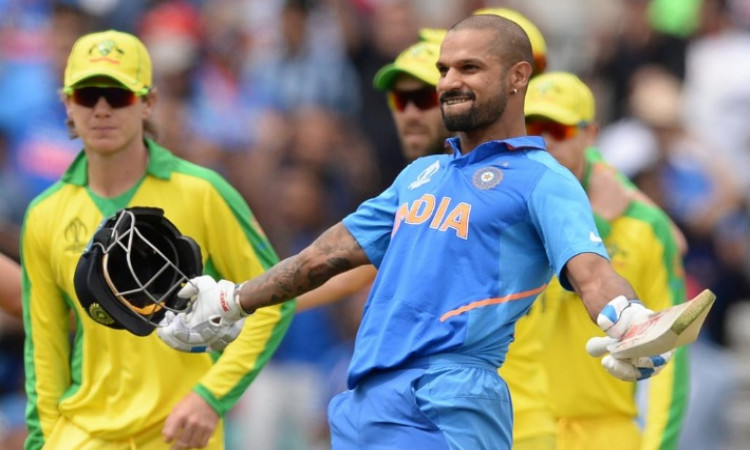 June 9 (CRICKETNMORE) Shikhar Dhawan continued his love affair with ICC tournaments, as he cracked a hundred to lead India's superlative batting show and help the team post a mammoth 352/5 in 50 overs against Australia in a marquee World Cup clash at the Kennington Oval here on Sunday.

Dhawan took 109 balls to score 117 with the help of 16 fours while skipper Virat Kohli smashed 82 off 77 balls, his innings laced with four fours and two sixes. Opener Rohit Sharma too scored a fluent 57 off 70 balls with the help of yhree fours and one six.

Dhawan and Sharma were involved in a 127-run opening stand before Kohli shared a crucial 93-run partnership with Dhawan.

Promoted up the order at No. 4, all-rounder Hardik Pandya smashed a 27-ball 48 (4x4, 6x3) as India took the Australian bowlers to the cleaners.

Marcus Stoinis was the pick of the bowlers (2/62) while Nathan Coulter-Nile and Pat Cummins also got a wicket each but not without getting hit to all areas of the park.

Opting to bat on a flat deck, the Indian openers took time to get going with both Sharma and Dhawan seeing off Cummins and Starc in the initial overs. Dhawan hit the first boundary for India, caressing Cummins through covers.

After seven overs, India were 22/0 before Dhawan smacked Coulter-Nile for three fours in the eighth over.

Finch introduced spin in the 11th over, throwing the ball to Glenn Maxwell and then to Adam Zampa as both operated in tandem. But it opened the floodgates for Sharma and Dhawan as they changed gears effortlessly, vindicating skipper Virat Kohli's decision to bat first.

Dhawan brought up his fifty in 53 balls while Sharma continued his rich vein of form, notching up his 42nd half-century in 61 deliveries.

Sharma also joined an elite club as he became the fourth cricketer after Sachin Tendulkar, Viv Richards and Desmond Haynes to aggregate 2,000 ODI runs against Australia.

However, the centurion in India's previous encounter against South Africa soon edged a Coulter-Nile rising delivery to Alex Carey behind the stumps to lose his wicket in the 23rd over. With his team cruising at 127/1, in came Kohli as India continued the carnage with Dhawan racking up his 17th ODI century.

Dhawan was in imperious touch and looked to up the ante after his hundred, but in the end holed out to substitute Nathan Lyon at deep mid-wicket off Starc.

Pandya was promoted to No. 4 to push the run rate up, and the wiry all-rounder did not disappoint, helping India plunder 57 runs between overs 40 and 45. Pandya missed out on a chance to score the fastest fifty for an Indian at the World Cup as he sliced a Cummins full toss to Finch at covers.

In the last five overs, with Kohli getting his full range after an uncharacteristic stuttering start, India bludgeoned another 59 runs with Dhoni smashing the likes of Starc from the word go.

It seemed nothing could go wrong for the Men in Blue as K.L. Rahul also hit one four and a six in his brief stay at the end, remaining unbeaten on 11 off just three deliveries.