Delhi Capitals (DC) defeated Royal Challengers Bangalore (RCB) by six wickets in their last league match of the Indian Premier League (IPL) to enter the playoffs with a second-place finish on the points table. RCB, too, qualified for the playoffs by virtue of stretching DC to the 19th over and maintaining their net run rate above Kolkata Knight Riders. 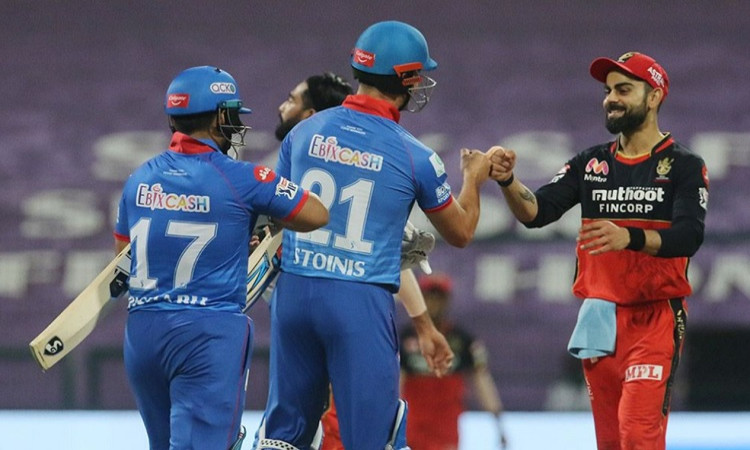 RCB's final spot on the points table will, however, be decided after Tuesday's match between SunRisers Hyderabad (SRH) and Mumbai Indians (MI). If SRH, who are on 12 points, win, RCB will finish fourth but if MI win, they will finish third and KKR will finish fourth.

As for DC, Monday's win guarantees them two shots at entering the final, the first of which will be on Thursday against Mumbai Indians in the Qualifier 1.

Shikhar Dhawan (54 off 41 balls) and Ajinkya Rahane (60 off 46) helped DC scale the 152-run target set by RCB. They added 88 runs for the second wicket to keep DC on track after Prithvi Shaw suffered yet another failure, getting bowled by Mohammed Siraj early in the innings for nine.

RCB spin attack, comprising Shahbaz Ahmed (2/26), Washington Sundar (1/24) and Yuzvendra Chahal (0-29), ensured that DC were stretched beyond 17.3 overs to be ahead of KKR's net run rate.

Nortje took three wickets for 33 while Rabada took two for 30 as RCB found the going tough.

Opener Devdutt Padikkal made 50 off 41 balls with five fours while AB de Villiers scored 35 off 21 deliveries.

Skipper Virat Kohli made 29 and shared a 57-run partnership for the second wicket with Padikkal.