A sensational fifty by skipper Faf Du Plessis, ably supported by fellow African Dawid Wiese with both bat and ball helped the Saint Lucia Kings claim a formidable win over the Barbados Royals on Saturday at the Warner Park Stadium. The win puts the Kings in pole position to qualify now for the semifinals while rendering the Royals out of contention of the Caribbean Premier League(CPL) 2021. 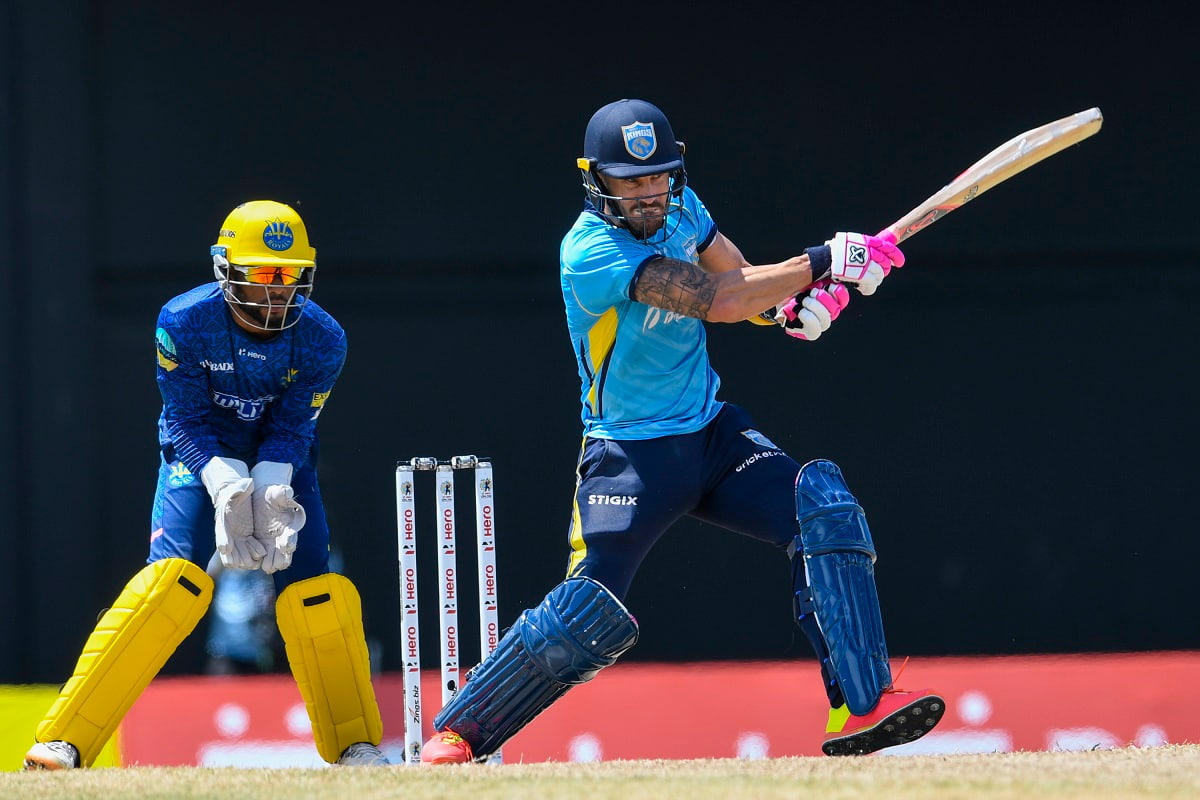 Asked to bat first, the Kings lost an early wicket as opener Andre Fletcher fell in the first over, out LBW to Mohammad Amir. His opening partner Mark Deyal though got the mark with aplomb, welcoming Jason Holder with a six over square leg.

The Kings though lost another wicket when Amir returned to ball, as Deyal edged one to the keeper to leave his side at 18/2 after four overs. Faf Du Plessis tried to counter-attack, getting a four and a six off Joshua Bishop’s bowling, but the left-arm spinner responded well as he knocked over new man Roston Chase for a duck with the penultimate ball of the powerplay.

With the field spreading out post the powerplay, the Kings’ skipper and new man David Wiese began neatly picking the gaps. The duo ran quickly between wickets and picked up regular boundaries off the loose balls to add 33 runs in the next four overs. In the 12th over, Du Plessis got to his first fifty of the 2021 CPL season with a strike-over covers off Hayden Walsh Jr.

Wiese at the other end however had to concede his wicket away when he tried to take on Walsh Jr., hitting one straight into the hands of the deep mid-wicket fielder to leave the score at 85/4 after 12 overs. Despite the wicket, Du Plessis looked undeterred as he tonked Jake Lintott straight over his head for a six.

In the 16th over, Du Plessis switched gears as he went on the aggressive, hitting Walsh Jr. for a big six over cow corner. He followed that up with a six and a four when Nyeem Young came back into the attack. The Royals spinner however had the number of the Kings skipper a couple of balls later, as Du Plessis mistimed one to be caught at long on.

The 37-year-old though contributed 84 runs before being dismissed, as he pushed the team total to 135/5 after 17 overs. With just three overs to go, Kings batters David and Keemo Paul went for the jugular, as they added 24 runs in the next two.

David added another maximum in the final over but was out caught in the deep when he tried repeating that big shot. Nevertheless, that late hurrah ensured the Kings finished at a formidable 175/6.

The Kings started off with two quiet overs, conceding just eight runs off the first two balls. The pressure immediately induced a wicket, as Kyle Myers hit one recklessly off Jeavor Royal’s bowling to find the fielder in the deep.

Johnson Charles and Shai Hope however put the pressure back on the Kings, as they picked up a six and a four apiece to get the total to 40 after five overs. The final powerplay over also proved expensive, as Alzarri Joseph was hit for two sixes over the square leg boundary by Charles to put the Royals in the ascendency.

Shortly after the powerplay, however, the dangerous Charles was sent packing by Wiese, out caught and bowled playing a nothing shot in the air. The Namibian International added two more in the same over, as Glenn Philips and Shai Hope were both out caught behind, turning the game completely on its head.

Things got even worse for the Royals two overs later, as new man Thisara Perera had to walk back for a low score thanks to a brilliant boundary line catch by Keemo Paul. Barbados captain Jason Holder however wasn’t going to go down without a fight, as he latched onto Jeavor Royal’s final over, hitting him for three almighty sixes down the ground. Holder ended that over with a four towards backward point, as the team score got past 100 after 13.

Nyeem Young at the other end however couldn’t support his captain, as he was out caught at long on when Wahab Riaz came back to bowl. A couple of overs later, the Royals lost their last hope of salvation as Wiese came back into the attack and claimed the wicket of Jason Holder, leaving the chasing team at 118/7 before the game was interrupted by rain.

When play resumed, it was just about going through the motions for the Kings as the target was pretty much beyond the Royals with their tail exposed. Their tailenders however did well to take the game to the final over, but ultimately the Royals were downed by 14 runs as Wiese ended with his first-ever five-wicket haul in T20 cricket