Sunil Narine’s brilliant 50 with the bat and economical 2/19 with the ball saw Trinbago Knight Riders kick off the Caribbean Premier League (CPL) 2020 in style, beating Guyana Amazon Warriors by 4 wickets in the tournament opener at Tarouba. 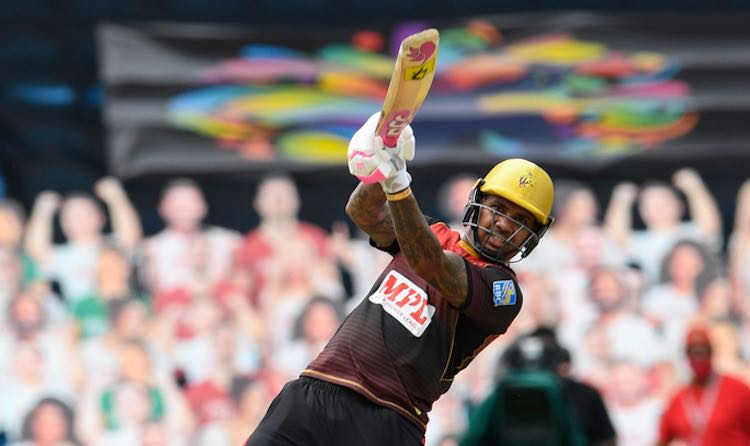 Pollard’s decisions to bowl first in a match shortened by rain to 17 overs each, and to entrust Ali Khan with the first over, were each vindicated almost immediately when last year’s Hero CPL top scorer, Brandon King, sliced to point for a duck.

Chandrapaul Hemraj chipped a return catch to Narine, and the Knight Riders spinners were bowling so well that at one point Pollard even brought himself in at short leg. It wasn’t until Ross Taylor brought out his signature slog sweep at the end of the seventh over that we saw the tournament’s first Hero Maximum.

The Kiwi veteran showed his strength off his legs, picking up West Indies U19 star Jayden Seales for another six, but an edge past slip off the young fast bowler and one that Pollard couldn’t hold at slip off Fawad Ahmed studded a stand of 50 for the third wicket.

Narine skidded one past Taylor to end the partnership with Hetmyer, but Nicholas Pooran started in purposeful fashion with a reverse sweep for four. The two West Indies internationals were content to see off Narine, and with the Amazon Warriors entering the last 5 overs well-placed at 89/3, a huge straight six from Pooran saw them take 16 off DJ Bravo’s second over.

Hetmyer wasn’t fazed by the loss of Pooran, launching Seales for a Hero Maximum into the stands to bring up his fourth career Hero CPL fifty off just 38 balls. Rutherford holed out trying to repeat the dose off Bravo, but Hetmyer and his fellow Guyanese, Keemo Paul, scrambled 7 off a good penultimate over by Ali and then smashed Bravo for 15 off the last to set the Knight Riders a tricky 145.

The Amazon Warriors started magnificently with the ball, with Afghan pace sensation Naveen-ul-Haq, new captain Chris Green and Romario Shepherd combining to keep Knight Riders’ openers Narine and Lendl Simmons to just 9 off the first 3 overs. Simmons swung and missed at four Shepherd slower balls in a row, and while he broke the shackles a little with back-to-back fours off Green it was no surprise when he became Naveen’s first ever Hero CPL wicket, spooning a slower ball to the infield and departing for a sluggish 17.

The Knight Riders began to find their feet after the Guardian Life Powerplay, with Narine hitting Green over midwicket and Munro hitting the same bowler clean out of the ground. But Shepherd came back and dismissed the prolific Kiwi for 17, with the aid of a superb diving catch by King. It was a fine comeback after Munro had carved a four and scooped a six off his previous two balls. 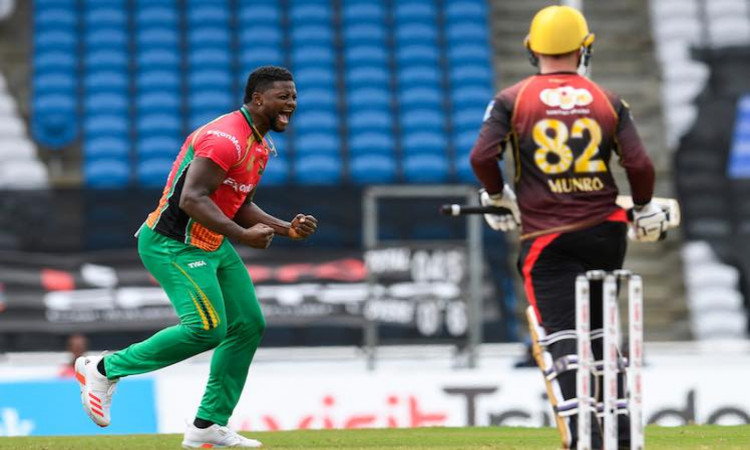 Paul kept the ball out of Narine’s reach, sometimes literally, with his first over going for just six, but the pinch-hitter extraordinaire broke free, with even Imran Tahir going for back to back boundaries to take the Knight Riders into the Angostura LLB drinks break at 81/2 needing 64 off the last 48 balls.

Narine continued his assault, launching consecutive Hero Maximums to bring the required run rate down to just seven an over, but finally holed out off Tahir just after simultaneously being dropped and bringing up his 50 off a remarkable 27 balls. The veteran South African eschewed his trademark celebration in favour of taking the knee and raising a fist in honour of the Black Lives Matter movement.

Narine’s aggression meant Darren Bravo could play himself in, and when Pollard signalled his intentions by launching Tahir back over his head it looked a simple chase for the hometowners. But late drama saw the skipper and Tim Seifert both caught by King, the second a diving Republic Bank Classic to go with the Munro grab, and the elder Bravo brother’s penultimate over Hero Maximum was vital in keeping the equation on the Knight Riders’ side. 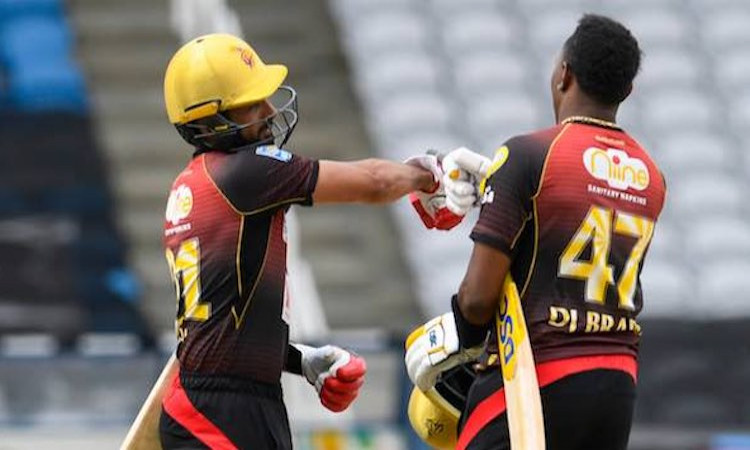 He couldn’t quite see his team home, falling to the impressive Naveen who was entrusted to close the innings as he’d opened it, but younger brother Darren held his nerve, and the hometown boys are on the board early.

With Inputs from CPL 20 Press Release