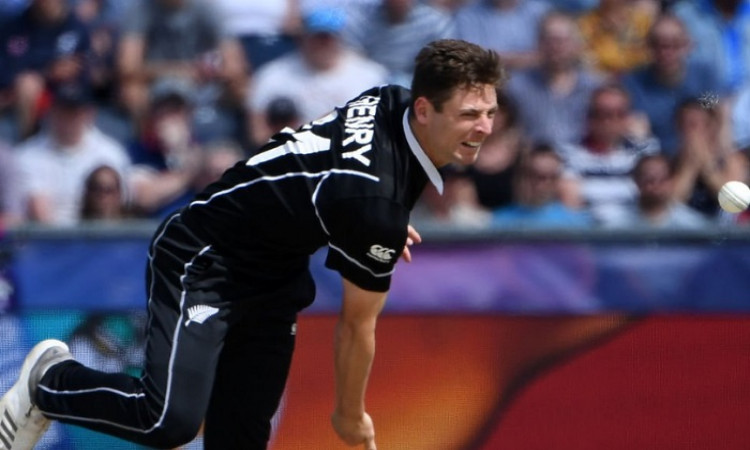 July 11 (CRICKETNMORE) The much-famed Indian batting line-up stood at 5/3 in the fourth over with Rohit Sharma (1), Virat Kohli (1) and K.L. Rahul (1) back in the hut in the first semi-final against New Zealand on Wednesday. While Trent Boult picked the all-crucial wicket of Kohli, Matt Henry said that breaking the opening partnership held the key for the Kiwis. Henry finished with three wickets as New Zealand defeated India by 18 runs at the Old Trafford to enter the finals of the ongoing World Cup.

"We wanted to get on top and put them under pressure. India have a world-class batting line-up and to break that opening partnership was huge. They (India) bat a long way down and we were aware that the work wasn't done after the first ten overs. We knew they would establish a partnership and we had to, therefore, control the run rate.

"We've faced so many challenges through this tournament, we just had to focus on our brand of cricket and trust the match winners we have in our dressing room. Whatever happened in the past didn't really matter.

"This is up right there for me, coming into a semi-final and coming out on the right side of a tight match is always going to be tough to beat," Henry, who was adjudged the Player of the Match, explained.

Meanwhile, with 17 wickets from 10 games, Boult has been on a roll and he feels that when the ball starts moving around, the New Zealand attack is one of the best in the business.

"It was mayhem out there with the new ball, it was a dream start for us and great fun to be a part of. We knew our best balls are good enough for anyone, so it was nice to get the ball moving around and really put the pressure on them.

"They absorbed the pressure nicely and anything can happen with M.S. Dhoni and Ravindra Jadeja at the crease, so it's just nice to come out on the right side," Boult smiled.

Henry said that from hereon, it's all about enjoying as the Kiwis gear up for the final battle of the World Cup.

"We're just excited about playing in a World Cup final at Lord's -- it doesn't get bigger than that and whoever we play, we'll just enjoy it.

"I think we are good enough to beat anyone. Every side is stacked with good players but we can wait to be out there on the big dance, this means everything to the side. Semi-finals are a special opportunity. We knew it would be tough for them if we took early wickets and that gave us the platform we needed," said Henry.