Battle of nerves as England face Australia in semis 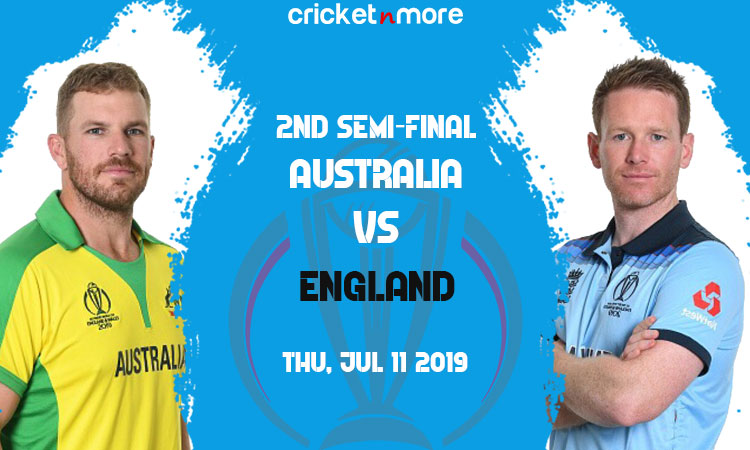 July 10 (CRICKETNMORE) They came into the tournament as favourites, but Englands poor show in the middle of the group stages saw them almost being ousted from the 2019 World Cup. But the hosts got their act right and won their last two games against India and New Zealand to qualify for the semi-finals of the showpiece event. And now, they are set to take on arch-rivals Australia at the Edgbaston Cricket Ground on Thursday.

A resurgent Australian outfit -- under the able leadership of Aaron Finch -- has taken the showpiece event by storm and has once again shown an affinity to rise to the challenge on the big stage. The first team to qualify for the knockouts, Australia lost their last group game against South Africa which saw them finish second on the points table, otherwise they looked set to be finishing as leaders after the group stage.

However, that will act as motivation for the Australians as they are keen to show the world that the Sandpaper Gate fiasco is a thing of the past and this team is just as good as those that won the showpiece event five times over the years.

For the Englishmen, it is more about staying true to the tag of favourites and not crumbling under the pressure of expectations. They have a talented bunch of players, but consistency has been a worry for them in this tournament. However, with Jason Roy back at the top of the innings, things are looking in control once again for the hosts.

Interestingly, hard-hitting batsman Jos Buttler's form would definitely be a worry for the Englishmen as he is yet to light up the tournament. Yes, he has scored a century, but the swashbuckling batsman is expected to do a lot more than score just 253 runs. Ben Stokes, on the other hand, has been brilliant coming in lower down the order. He has scored 381 runs with four fifties.

But the stars of the show have been Test skipper Joe Root and opener Jonny Bairstow. While Root is the highest scorer in the team with 500 runs (two centuries and three fifties), Bairstow has managed to score 462 runs with two hundreds and two fifties.

The bowling too has looked good with Jofra Archer picking 17 wickets and Mark Wood clinching 16. But one area of concern would be the form of frontline spinner Adil Rashid. With just 8 wickets from nine games, he definitely needs to buck up.

As for the Aussies, opener David Warner and skipper Finch have led from the front in the batting department. While Warner has 638 runs with three hundreds and three fifties, Finch has 507 runs with two hundreds and two fifties.

In the bowling department too, Mitchell Starc has been one of the best in world cricket. And while he seemed a bit off form coming into the World Cup, he now has 26 wickets in his name. And Pat Cummins has played perfect second fiddle with 13 wickets. Not to forget the left-arm deliveries from Jason Behrendorff.

All in all, it will be a battle of nerves more than talent as only those who have the aptitude to soak in pressure will perform on the big stage.