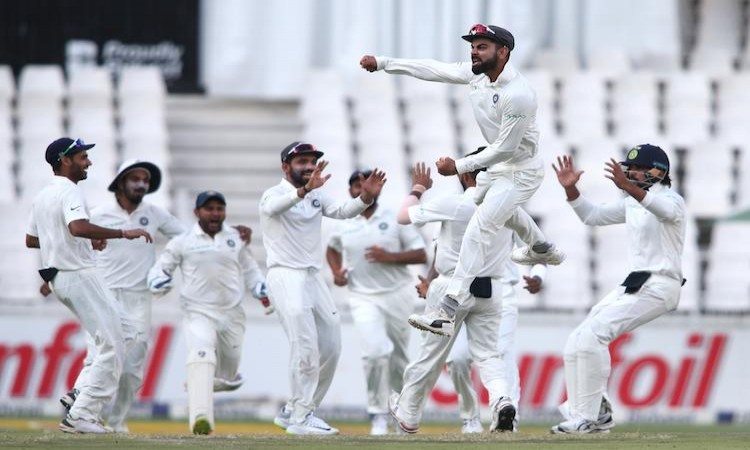 Johannesburg, Jan 26 - South Africa reached 17/1 after play was called off with the condition of the pitch being discussed on the third day on Friday here after India set-up a target of 241 for the hosts to win the third and final Test.

Due to the odd and uneven bounce, play was called off as both the captains, India's Virat Kohli and South Africa's Faf du Plessis discussed the issue with match referee Andy Pyrcroft with close to 30 minutes left on the day's play at the New Wanderers Stadium.

The field umpires discussed the issue more than five times during the day, even during the Indian innings of 247 all out, with cracks appearing on the surface. On a few occasions the ball apparently kept low.

The umpires, however, discussed the matter with much more seriousness when South African left-arm opening batsman Dean Elgar (11 batting) was struck on the helmet by a delivery from Jasprit Bumrah. But it was a short delivery and climbed up to an usual height. But some of the back of length deliveries got odd bounce and struck on the bodies of the visiting and home batsmen.

It will be up to the match officials whether to continue playing on the pitch or call off the match terming the pitch 'dangerous'.

Hashim Amla (2 batting) and Elgar were at the pitch for the hosts, who lost the opening wicket of Aiden Markram (4) who edged a bouncer from Mohammed Shami behind.

Earlier in the day, India put up a gutsy show with the bat before being bowled out for 247. Ajinkya Rahane (48), Virat Kohli (41) and Bhuvneshwar Kumar (33) were the key contributors for India, who have already lost the first two matches.

Rahul failed to add to his overnight score as he chased an away-moving ball from paceman Vernon Philander, only managing an edge which landed in the hands of Faf du Plessis at second slip.

Kohli then joined hands with overnight batsman Murali Vijay (25) as the pair looked to weather the storm on a lively wicket.

Kohli, at the personal score of four, gave a difficult chance for the hosts to pick up the fourth wicket. He flicked Morkel straight into the hands of short leg fielder Aiden Markram, who was not quick enough to pouch it.

Later, Kohli showed his quality, playing with a straight bat and not fearing to go for the drives.

Vijay, at the other end, was resolute, backing his defensive technique to the hilt.

It seemed that the partnership between Vijay and Kohli will see off the morning session. But Vijay saw his stumps dismantled by a yorker from Kagiso Rabada as India reached 100 for four at lunch.

Rahane -- who was dropped in the initial two Tests raising questions on the Indian team selection -- shone bright in the second session, while Kohli perished for 41.