Centurion, Feb 21 (CRICKETNMORE) - After a comprehensive victory in the first Twenty20 International, India will aim to seal the three-match series when they take on South Africa in the second match here at the SuperSport Park on Wednesday. 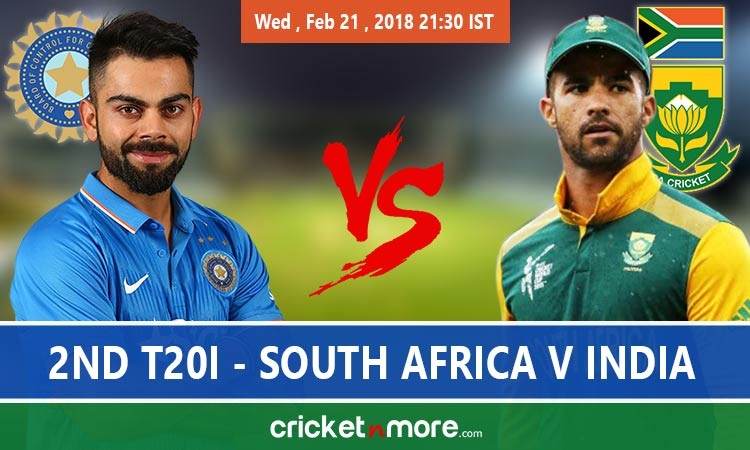 In the first game, a brilliant all-round show helped visitors beat hosts South Africa by 28 runs at the New Wanderers Stadium. Put in to bat, Shikhar Dhawan (72) hammered the South African bowlers all around the park and helped India post a massive 203/5 before pacer Bhuvneshwar Kumar (5/24) wreaked havoc in the South African batting line-up to take a crucial 1-0 lead.

The Virat Kohli-led India will hope to repeat the performance but with middle-order batsmen also playing their part this time. In the last match, Manish Pandey, Mahendra Singh Dhoni and Hardik Pandya failed to provide the expected final flourish. Pandey struggled to score big, scoring 29 not out in 27 deliveries. It will be interesting to see whether the Karnataka right-hander gets another chance.

Bolstered by terrific spell by Bhuvneshwar Kumar, who was adjudged the Man of the Match, India will hope to create havoc once again to seal the issue.

In the batting department, alongside skipper Kohli, batsmen Rohit Sharma, Dhawan, Dhoni and Pandya will look to make the most of their capabilities this time also.

Batsman Suresh Raina, who made a comeback in the T20Is will act as an vital cog in the middle-order and will look to prove his mettle after his seven balls 15 runs in the first match.