Kolkata, Nov 13 (CRICKETNMORE): India's premier off-spinner Ravichandran Ashwin, who was out of international cricket for the past three months, was on Monday seen practising wrong 'uns while skipper Virat Kohli played a lot of bouncers bowled at him with coloured balls during India's first practice session ahead of the three-match Test rubber against Sri Lanka. 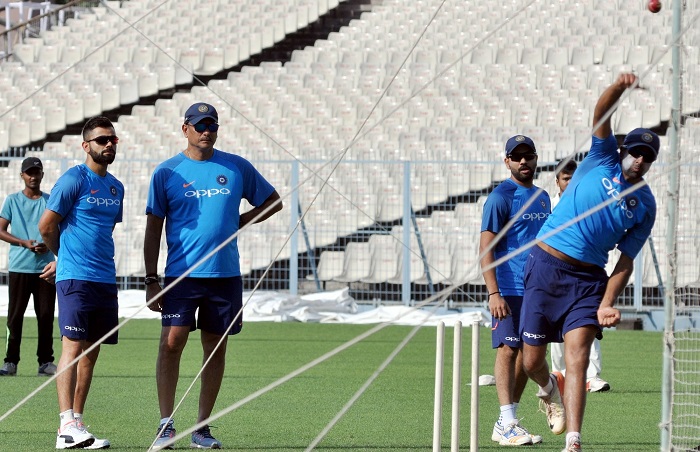 Sans Saurashtra players Ravindra Jadeja and Cheteshwar Pujara who played their round five Ranji Trophy match against Gujarat, the entire Indian team sweated it out for nearly two and a half hours in the afternoon.

The batsmen also played a lot of reverse sweeps at the nets, with Ajinkya Rahane spending the most time with the bat.

"It's how you react to a particular ball. It's not that we have planned differently for a particular bowler. There's no compulsory shot like that," wicketkeeper-batsman Wriddhiman Saha told reporters on the sidelines of India's first practice session at the Eden Gardens here.

Besides Kohli who was given throwdowns with a yellowish ball by batting coach Sanjay Bangar, other batsmen also played a lot of bouncers.

Saha said the focus is not on South Africa and they want to win this series first. Pujara had said a few days back that this would present a good opportunity for the No. 1 side to prepare for the Proteas challenge.

India will play three Tests, six ODIs and three T20 internationals against the Proteas. The first Test is on January 5 in Cape Town.

Batting coach Thilan Samaraweera, bowling coach Rumesh Ratnayake and team manager Asanka Gurusinha had a good look at the 22-yard strip which had a lot of grass on it, which was later removed on the instructions of the India team management.

"The pitch looks good but there is a lot of grass on it," Pothas told reporters while leaving the stadium.

Chandimal was seen in a relaxed mood in denims and shorts.

The tourists cancelled their training this morning after playing a two-day warm-up game against Board President's XI. The match ended in a tie but four Lankan batsmen notched up half centuries.

Chandimal and co were blanked 9-0 across all formats by India in their own backyard in August this year. They won 2-0 against Pakistan in the longest format of the game in the UAE but lost all limited overs matches.