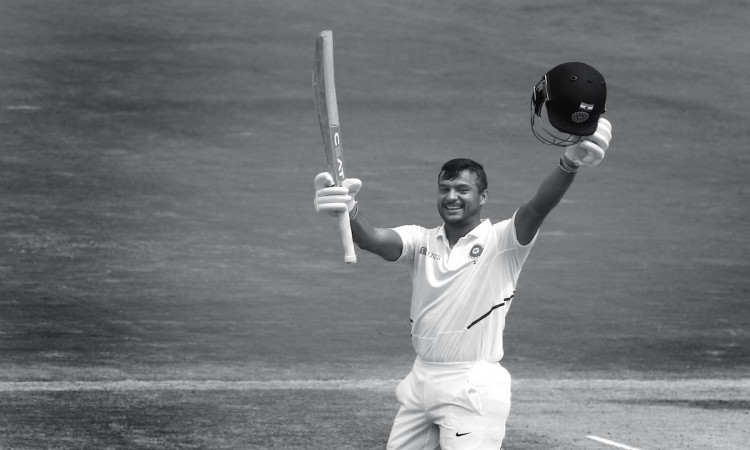 Visakhapatnam, Oct 3: If it was the Rohit Sharma show in the morning session on the second day of the first Test between India and South Africa, the afternoon session belonged to his opening partner Mayank Agarwal. Having played second fiddle till Rohit made hay, the youngster rose to the occasion after Rohit's dismissal to notch his first double hundred in Test cricket as the hapless Proteas bowlers went through the paces in the post-lunch session at the ACA-VDCA Stadium on Thursday.

At Tea, India's score read 450/5, with Ravindra Jadeja batting on 6 and Hanuma Vihari batting on 8. Mayank Agarwal was dismissed just before the tea break for 215. His 371-ball knock consisted of 23 boundaries and six sixes.

The only silver lining in the dark clouds for the visitors is the four wickets they managed to pick up in the session as it was otherwise a phase that was completely dominated by India.

While Vernon Philander dismissed Cheteshwar Pujara for 6 -- once again the ball beating the edge of the bat to rattle the stumps -- Senuran Muthusamy dismissed skipper Virat Kohli for 20. Test deputy Ajinkya Rahane was dismissed by Keshav Maharaj - caught by Temba Bavuma for 15.

But the most unfortunate of the lot had to be Mayank as he hit a full toss from Dean Elgar straight to Dane Piedt at the mid-wicket boundary to be dismissed against the run of play.

Interestingly, Rahane's dismissal saw India promote Ravindra Jadeja over Hanuma Vihari as Kohli and boys made their intentions very clear. They want to score quick runs and push for a declaration.

While the Proteas bowlers did manage to pull back things a bit by picking the wickets, the Indian have enough runs on the board to push the South Africa batsmen on the backfoot when they come out to bowl.

Earlier, starting the day at 202/0, Rohit and Mayank went on the offensive after the first few overs and scored boundaries at will to put Proteas on the backfoot. Such was the dominance from the Indian openers that they scored 14 fours and a six in the first 20 overs of the day.

Rohit, who had scored his first Test ton as opener on Wednesday, started from where he left on Wednesday and batted with ease. Mayank also supported him well and went on to score his maiden century in Test cricket. The 28-year-old, who made his debut against Australia in Melbourne in December 2018, reached the landmark in his 8th innings.

The duo added 317 runs for the opening wicket, becoming the third Indian opening pair to stitch a 300-run partnership, before Rohit lost his wicket to Keshav Maharaj, stumped by Quinton de Kock. The 32-year-old, who scored 176 runs, smashed 23 fours and 6 sixes during his 244-ball innings.