WATCH: Batting Average Of 11 In T20s, This Batter Opens The Innings First Time And Takes Sixers To Finals

In the concluded Challenger match of the Big Bash League (BBL 2021-22) between Adelaide Strikers and Sydney Sixers, Hayden Kerr emerged as the best player of the match for Sixers with his 98*, taking Sydney to the BBL Finals with a 4 wicket victory. But, did you know that before this match, this batter had a batting average of 11 in T20s?

Sydney Sixers lost their regular opener and wicketkeeper Josh Philippe a few hours before the match, due to Covid. The team's assistant coach Jay Lenton donned the gloves for Sixers. However, the opening slot was taken by a batter who had played at #8 for Sixers in this season. 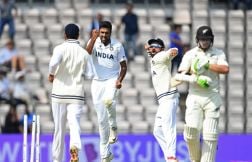