June 15 (CRICKETNMORE) - England's famous ground, the Old Trafford in Manchester, has been a historic venue for Indian cricket. There have been some wonderful moments and equally depressing ones as well. But, overall, India has come out with some magnificent performances there.

On Sunday, India will play their most important encounter in the World Cup 2019 against Pakistan. This for the Indian and Pakistan fans and followers is what could be termed as "The Big Bash". The winning of the World Cup is revered, but a loss for either side in the battle of the two Asian giants is unacceptable.

An Indians first tryst with the Old Trafford was when Ranjitsinhji, the then Prince of Nawanagar, now Jamnagar, scored a brilliant century for England on his debut. The committee of the Manchester based club selected a coloured person to play for their team after receiving acceptance from the Australian captain. Ranji, as he was popularly called, was the first non-white to ever compete in a white dominated sport, a great achievement which most Indian cricket historians fail to acknowledge.

India's first overseas Test century was also scored at the Old Trafford in 1936. India's flamboyant opening batsman, Syed Mushtaq Ali, was the man to achieve it. His opening partner Vijay Merchant, who was considered to be one of India's best technically perfect batsman, followed him thereafter and their opening double century partnership is still something to revere.

In 1959, the stylish Abbas Ali Baig made his century on debut at the Old Trafford at the age of 20. There have been many such wonderful and determined knocks played thereafter, but the one still remembered is the century scored by Sunil Gavaskar in 1974, on a cold, windy and cloudy summer day.

India, in the 1983 World Cup semi-final match against England, came through victorious at the Old Trafford. Beating the strong England side at home is what made one believe that India did have the fire power to win the cup then.

India's poster boy wicket-keeper, Farokh Engineer, kept Manchester ticking in the hearts of many Indian fans. He played as a professional for Lancashire for eight years when their team was at its strongest and best under the captaincy of the West Indian, Clive Lloyd.

Manchester is home for many Asians. The city that became famous for its cotton textile lends its name to the "Manchester city of India, Ahmedabad". The century-old Asian residence along with the thousands of fans from around the world will throng to each and every seat at the stadium.

The biggest battle of the cricket World Cup 2019, one hopes does not get ruined on account of rain. The International Cricket Council (ICC) have erred in scheduling an important cricket tournament like the World Cup. Without an option of an extra day, the English weather at the beginning of June is always a concern of it being affected by rain.

The ICC should have scheduled the most prestigious cricket tournament in the month of July and August, when the weather significantly improves or insisted on ground covers at all the venues that were hosting the matches. The tournament is held to celebrate the cricket champion of teams competing on a level playing field and not a tick mark for the ICC to complete.

India, have in the last two years, shown that on paper they are a better side than Pakistan. With two victories under their belt, the Indian side looks confident and raring to go. Pakistan, on the other hand, were demolished by the West Indies and then beaten by the professional Australian outfit. Pakistan need to win the encounter against India desperately as a loss will then require them to win all their remaining matches. The mental aspect of it magnifies when during the match things are not going ones' way. Pakistan, have against India in all their previous World Cup encounters, lost matches in their anxiousness to win.

The area that Pakistan have shown the maximum weakness has been in their fielding and especially their catching. In the past, dropping crucial catches has played a big part in their loss. The present team showed the same characteristics, when they dropped simple catches in their match against Australia recently as well.

The match has two brilliant batsmen in Virat Kohli from India and Babar Azam from Pakistan. The batting of both their teams will revolve around them, as both are technically blessed with skill and strokes. India will depend on their star bowler Jasprit Bumrah to spearhead their attack whereas, Mohammad Amir, the Pakistan speedster, seems to have got back his confidence and rhythm and could be a major threat to the strong Indian batting unit. There is not much difference in the overall strength of both the teams and that is precisely why this encounter will be great to watch.

This match is not a do or die for India. A win here should make their road to the semi finals quite certain. I feel this confident mental advantage is what should give India just the boost needed to beat Pakistan.

Cricket is an uncertain game and predicting a winner is never easy. But, the team that catches well will be the winner, after all "catches do win matches". 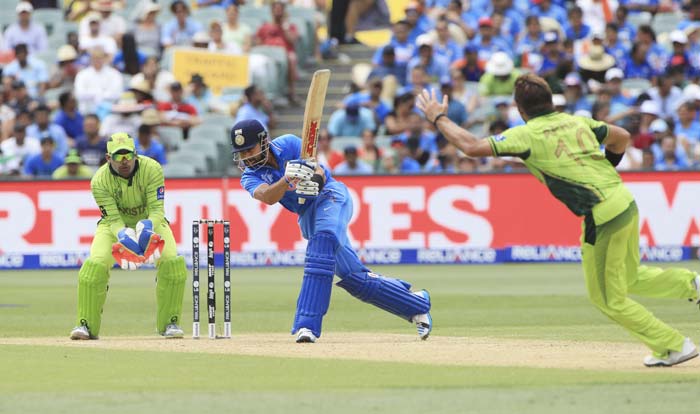